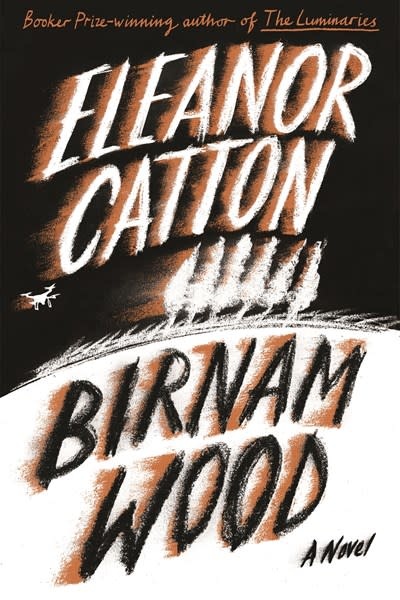 From the Booker Prize-winning author of The Luminaries, a gripping thriller of kaleidoscopic insight.

Five years ago, Mira Bunting founded a guerrilla gardening group: Birnam Wood. An undeclared, unregulated, sometimes-criminal, sometimes-philanthropic gathering of friends, this activist collective plants crops wherever no one will notice: on the sides of roads, in forgotten parks and neglected backyards. For years, the group has struggled to break even. Then Mira stumbles on an answer, a way to finally set the group up for the long term: a landslide has closed the Korowai Pass, cutting off the town of Thorndike. Natural disaster has created an opportunity, a sizable farm seemingly abandoned.

But Mira is not the only one interested in Thorndike. Robert Lemoine, an enigmatic American billionaire, has snatched it up to build his end-times bunker—or so he tells Mira when he catches her on the property. Intrigued by Mira, Birnam Wood, and their entrepreneurial spirit, he suggests they work this land. But can they trust him? And, as their ideals and ideologies are tested, can they trust each other?

A gripping psychological thriller from the Booker Prize-winning author of The Luminaries, Eleanor Catton's Birnam Wood is Shakespearean in its wit, drama, and immersion in character. A brilliantly constructed consideration of intentions, actions, and consequences, it is an unflinching examination of the human impulse to ensure our own survival.

Eleanor Catton is the author of the international bestseller The Luminaries, winner of the Man Booker Prize and the Governor General’s Literary Award. Her debut novel, The Rehearsal, won the Betty Trask Prize, was short-listed for the Guardian First Book Award and the Dylan Thomas Prize, and was long-listed for the Orange Prize. As a screenwriter, she adapted The Luminaries for television and Jane Austen’s Emma for feature film. Born in Canada and raised in New Zealand, she now lives in Cambridge, England.