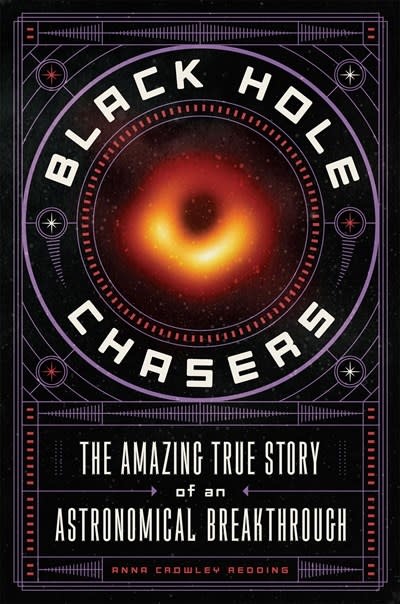 Award-winning investigative journalist Anna Crowley Redding presents the riveting true story of one of the most inspiring scientific breakthroughs of our lifetime—the Event Horizon Telescope team's reveal of the first image of a super massive black hole.

In April 2019, the Event Horizon Telescope team unveiled the first ever image of a super massive black hole.

This inspiring scientific breakthrough took years of hard work, innovative thinking, and a level of global cooperation never seen before. A multi-national team of scientists, lead by Dr. Shep Doeleman and Dr. Heino Falkem, used eight of the largest telescopes from around the world to collect over four million billion bytes of data, which was flown to teams of computer scientists and mathematicians, including Katie Bouman, who had the impossible task of stitching together all of these images.

Black Hole Chasers is a story of unique techonological innovation and scientific breakthroughs, but more importantly, it's a story of human curiosity and triumph.

Anna Crowley Redding is the author of Google It, Elon Musk: A Mission to Save the World, and Black Hole Chasers. The recipient of multiple Edward R. Murrow and Associated Press awards, Crowley Redding uses her Emmy award-winning investigative reporting skills to dig into compelling topics that are shaping our world. Her works have been translated into multiple languages, garnered national news coverage, and been recognized by the National Association of Science Teachers for excellence. Crowley Redding lives outside of Portland, Maine with her family.