Home » Black Sand Beach 2: Do You Remember the Summer Before? 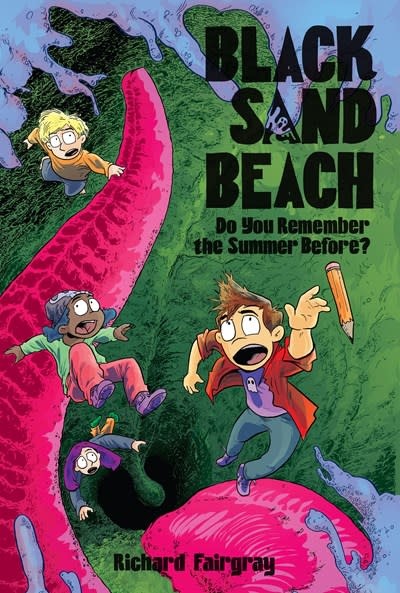 Black Sand Beach 2: Do You Remember the Summer Before?

A revelation about how Dash may or may not have spent the summer before raises the stakes even higher in this second installment of the eerie and enthralling Black Sand Beach series, perfect for fans of Gravity Falls, Rickety Stich, and Fake Blood.

Dash and his crew might have stumbled upon the source of the evil at Black Sand Beach when they stumbled into the abandoned and haunted lighthouse, but when Lily reveals that she found Dash’s journal there, the news is anything but comforting. The book is full of Dash’s reflections on his trip to Black Sand Beach the previous summer.

Only Dash doesn’t recognize the journal or have any memory of being there.

As the friends read the entries aloud, through flashbacks Dash’s unsettling encounter with two ghost girls, a truly terrifying monster, and a life changing event make one thing very clear: Black Sand Beach isn’t done with them yet.

Deliciously creepy and difficult to put down, Do You Remember the Summer Before? returns readers to a supernatural shore they’ll never forget.

Richard Fairgray is a writer, artist, and colorist, best known for his work in comic books such as Blastosaurus and Ghost Ghost, and picture books such as Gorillas In Our Midst, My Grandpa Is a Dinosaur, and If I Had an Elephant. As a child he firmly believed he would grow up and eat all the candy he wanted and stay up as late as he liked. By drawing pictures when he wasn’t meant to and reading all the things people told him not to, he has made his dream come true.

Richard splits his time between Los Angeles and Surrey, British Columbia, where he is able to work furiously, surrounded by plastic skeletons, dogs, friends, loved ones (and possibly the most comprehensive collection of Courtney Love bootlegs on the planet).