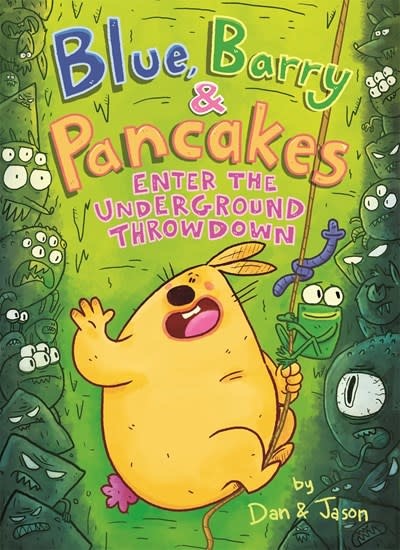 The fourth volume of the emerging readers graphic novel series about three friends (a bunny, a worm, and a frog) who get into conflicts and adventures driven by their very different personalities. Perfect for fans of Narwhal & Jelly and Elephant & Piggie!

One day, Barry and Pancakes want to go to the beach. But when they go to grab Blue, he's nowhere to be found. It turns out he left to search for a legendary stone buried deep underground, and didn’t invite his best friends to join him! Feeling hurt, Barry and Pancakes decide that they’re going to beat Blue to the treasure, but they are totally unprepared for the DANGER that awaits them in the cave of the Jelly Gem!

Like all friends, Blue, Barry, and Pancakes can make mistakes . . . but at the end of the day, they always have each other’s backs. And tops, and sides, and fronts, too!

Dan & Jason go back. Waaaaay back. They have directed award-winning commercials, created hit cartoon shows, and even sold a feature-film concept, but nothing has prepared them for this . . . the pinnacle of their storied career: publishing the hilarious and heartwarming comic tales of Blue, Barry & Pancakes! Dan & Jason have packed their stories with everything they know about drawing, writing, and the enduring power of friendship. They make everything together. They think it, draw it, write it, mix it, bake it, and serve it together. Teamwork!