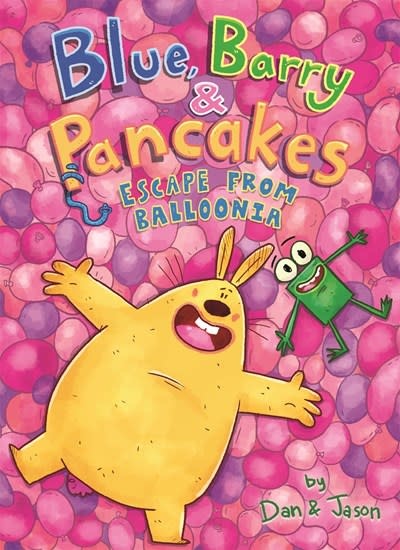 The second volume of the the children’s graphic novel series of friendship stories for emerging readers, featuring three friends (a bunny, a worm, and a frog) who get into conflicts and adventures driven by their very different personalities.

Blue, Barry, and Pancakes are friends. Sometimes they love to play together, but one day, Blue and Barry just want a quiet day to themselves. Unfortunately for them, Pancakes has other ideas— ginormous, inflatable, intergalactic-adventure-sized ideas!

Soon enough, Blue’s and Barry’s dream of a quiet day has become a squeaky nightmare. They, along with Pancakes, find themselves stranded on a planet that’s populated by living balloons called Balloonians. And if the gang wants to get home, they’ll have to work together to overcome the biggest, meanest, and scariest Balloonian of them all...Balloon Kong!

Dan & Jason go back. Waaaaay back. They have directed award-winning commercials, created hit cartoon shows, and even sold a feature-film concept, but nothing has prepared them for this... the pinnacle of their storied career: publishing the hilarious and heartwarming comic tales of Blue, Barry & Pancakes?! Dan & Jason have packed it with everything they know about drawing, writing, and the enduring power of friendship. Please enjoy their comic book debut! They make everything together. They think it, draw it, write it, mix it, bake it, and serve it together. Teamwork!