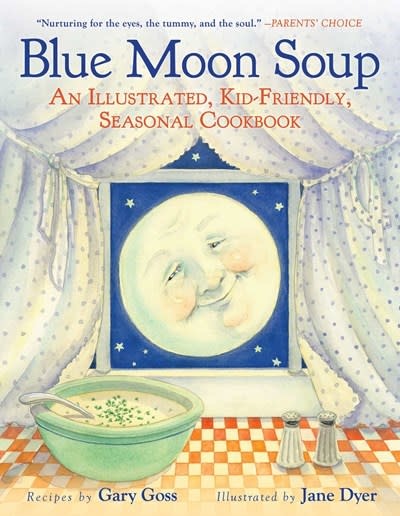 Explore the joys of cooking with children while enjoying some delicious seasonal soups!

Soup is delicious in every season, and this delightful cookbook includes more than thirty recipes for fall, winter, spring, and summer soups, as well as related recipes for bread, salads, and snacks.

Most notably, however, are Jane Dyer's ethereal illustrations that gracefully accompany the recipes, offering images of dancing celery and sunbathing tomatoes that are sure to keep kids engaged while in the kitchen. This is a wonderfully whimsical cookbook for the whole family.

Blue Moon Soup, originally published more than twenty years ago, is a quintessential cookbook—and a beautiful gift book for holidays and birthdays alike! Blue Moon Soup is the winner of such awards as the Smithsonian Notable Books for Children, Nappa Award, Oppenheim Toy Portfolio Gold Award, Real Life Award, and Bookbuilders of Boston, as well as the Parents' Choice Award.

Gary Goss is the founder and former chef of the former Soup Kitchen Restaurant in Northampton, Massachusetts, and the author of Where Does Food Come From with Shelley Rotner. His sumptuous soups have been featured in the New York Times, national magazines, and food guides. Goss once demonstrated his cooking skills across the country, appearing on the CBS Early Show and National Public Radio.

Jane Dyer is the illustrator of more than fifty books for children, including the New York Times bestsellers Time for Bed, Cookies: Bite-Size Life Lessons, and I Love You Like Crazy Cakes. She enjoyed making the recipes in Blue Moon Soup with her grandchildren years ago.