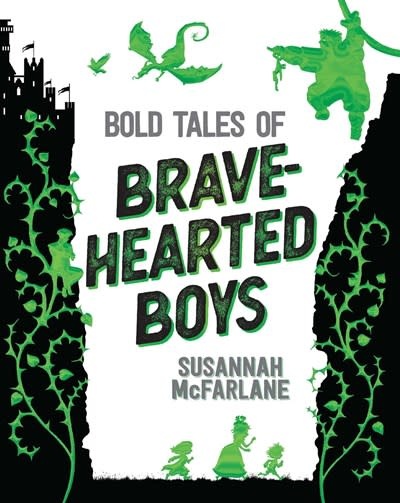 Perfect for fans of the classic stories, Disney lovers, and readers of Stories for Boys Who Dare to Be Different, this stunning and inspiring picture book collects reimagined fairy tales with a modern twist to value kindness and honesty as much as strength and valiance.

Battles are fought and dragons slain;

Yet our heroes find, as perhaps will you,

that it’s how as well as what you do.

Four brave heroes stand up for what is right in this beautifully illustrated treasury of modern fairy tales. There are many ways to be strong and save the day! Discover the gentle giant who forgives the troublesome thief who climbed his beanstalk, Hansel and Gretel as they work together to escape an evil witch, a young boy who tells the truth about the emperor’s clothes despite the consequences, and a prince who fights to help a sleeping princess in need.

Each story brings a unique perspective, a different illustrator, and all the charm of a classic storybook. This emboldening and accessible book is perfect for young princes and princesses learning to be clever, honest, and bold of heart.

Susannah McFarlane is the founding director of boutique children’s publisher Lemonfizz Media and the author, creator, and publisher of some of Australia’s most successful children’s book series, including EJ Spy School, Boy vs Beast, and Little Mates. Susannah has over twenty years’ experience as a children’s book publisher and worked with some of the world’s leading brands and writers. She actually counts Thomas the Tank Engine and Winnie the Pooh as friends, as well as former colleagues!

Brenton McKenna struggled with reading and writing until a comic book he picked up when he was ten years old changed his life. An Indigenous author-illustrator from Broome, Australia, he now creates his own graphic novels, finding inspiration in ghost stories, folklore and mythologies. McKenna is recognized as Australia’s first Indigenous graphic novelist. He’s written and illustrated the Ubby’s Underdogs series and illustrated other projects, including Bold Tales of Brave-Hearted Boys.

Simon Howe is a picture book illustrator and development artist with a broad appetite for children’s literature, animation, storytelling, and design. He has illustrated several books for children, and since 2015, Simon has been working with kids folk band Teeny Tiny Stevies, designing, directing, and animating their music videos. Simon is also the co-owner of Pirate Size Productions, a small company that develops and produces high quality entertainment for children, young people, and families. Their work has been nominated twice for ATOM Awards and one film, Tilly & Gus: Our Friend Bloom, screened at the 2019 Chicago International Children’s Film Festival.

Matt Huynh is a Sydney-born, New York-based visual artist and storyteller. His bold brush and ink paintings are informed by calligraphic Eastern sumi-e ink traditions, the mechanical reproduction of popular Western comic books, and their limitations. Huynh’s work combines familiar traditional sumi-e painting techniques with found perishable objects repurposed for unpredictable mark-making. His illustrated essays, comics, and animations interrogate the vast impression of war, with a particular focus on amplifying diasporic voices, telling refugee narratives and the experiences of asylum seekers and migrant communities. Huynh’s paintings, comics, and murals have been exhibited by the MoMA, the Smithsonian, the Sydney Opera House, Brooklyn Museum, Brooklyn Academy of Music, and the New-York Historical Society.

Louie Joyce is an award-winning comics creator and illustrator based in Wollongong, Australia. After spending his childhood dreaming of becoming an astronaut, superhero, futuristic biker punk, enchanted mermaid, or something cool like that, Louie realized he’d been dreaming a little too long and most of that stuff was impossible anyway. Luckily, he can draw pretty well so he’s able to experience all those things and more by putting pencil to paper. He CAN be an enchanted mermaid if he wants to! His comics include Haphaven and Past the Last Mountain. Louie’s illustration work has been exhibited internationally and he works with a wide range of clients creating illustrations for storyboards, animation, publishing, and concept development.