Home » Bookish and the Beast 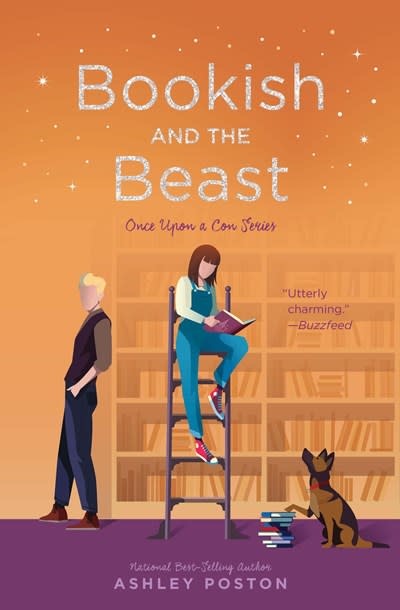 Bookish and the Beast

A tale as old as time is made new in Ashley Poston’s fresh, geeky retelling of Beauty and the Beast—now with a bonus Starfield story!

In this third book of the Once Upon a Con series, Rosie Thorne is feeling stuck—on her college application essays, in her small town, and on that mysterious General Sond cosplayer she met at ExcelsiCon. Most of all, she’s stuck in her grief over her mother’s death. Her only solace was her late mother’s library of rare Starfield novels, but even that disappeared when they sold it to pay off hospital bills.

On the other hand, Vance Reigns has been Hollywood royalty for as long as he can remember—with all the privilege and scrutiny that entails. When a tabloid scandal catches up to him, he’s forced to hide out somewhere the paparazzi would never expect to find him: Small Town USA. At least there’s a library in the house. Too bad he doesn’t read.

When Vance’s and Rosie’s paths collide, sparks do not fly. But as they begrudgingly get to know each other, their careful masks come off—and they may just find that there’s more risk in shutting each other out than in opening their hearts.

Series Overview: Your favorite fairy tales take to the page as geeky, funny, and adorably romantic contemporary YA novels. A handsome sci-fi prince falls for a passionate fangirl. Hollywood’s geeky leading lady swaps places with an ordinary con-going girl who could be her twin. A bookish, small-town girl finds herself drawn to a newcomer with a mysterious past in a secluded mansion. Hijinks, hilarity, and sweet love stories ensue. Perfect for contemporary YA fans, geeks, cosplayers, and any readers who believe in the magic of fandom.