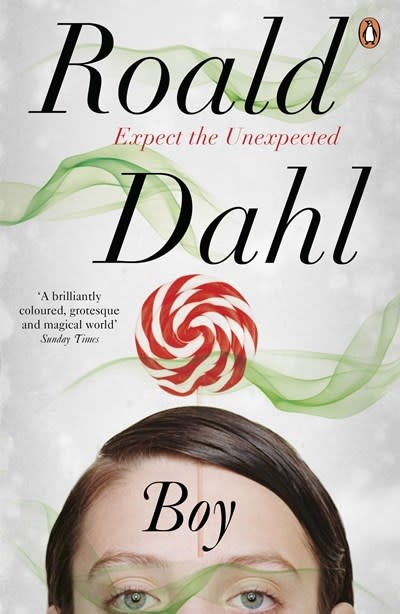 Find out where the bestselling author of Charlie and the Chocolate Factory and The BFG got all his wonderful story ideas in this autobiographical account of his childhood!

Boy is a funny, insightful and at times grotesque glimpse into the early life of Roald Dahl, one of the world’s favourite authors. As full of excitement and the unexpected as his world-famous, best-selling books, Roald Dahl’s tales of his own childhood are completely fascinating and fiendishly funny. Did you know that Roald Dahl nearly lost his nose in a car accident? Or that he was once a chocolate candy tester for Cadbury’s? Have you heard about his involvement in the Great Mouse Plot of 1924? If not, you don’t yet know all there is to know about Roald Dahl. Sure to captivate and delight readers of all ages, the boyhood antics of this master storyteller are not to be missed!

Roald Dahl (1916-1990) was born in Wales of Norwegian parents. He spent his childhood in England and, at age eighteen, went to work for the Shell Oil Company in Africa. When World War II broke out, he joined the Royal Air Force and became a fighter pilot. At the age of twenty-six he moved to Washington, D.C., and it was there he began to write. His first short story, which recounted his adventures in the war, was bought by The Saturday Evening Post, and so began a long and illustrious career.

After establishing himself as a writer for adults, Roald Dahl began writing children’s stories in 1960 while living in England with his family. His first stories were written as entertainment for his own children, to whom many of his books are dedicated.

Roald Dahl is now considered one of the most beloved storytellers of our time. Although he passed away in 1990, his popularity continues to increase as his fantastic novels, including James and the Giant Peach, Matilda, The BFG, and Charlie and the Chocolate Factory, delight an ever-growing legion of fans.