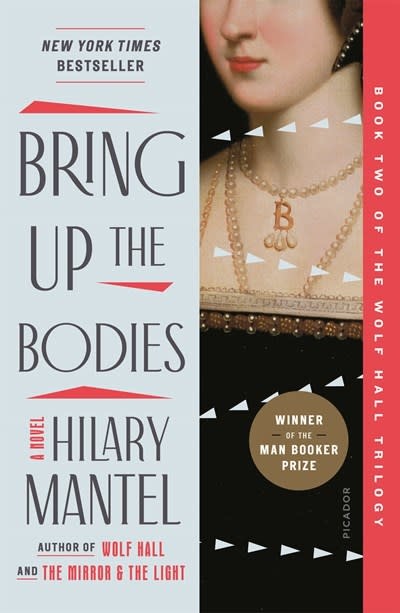 The Man Book Prize-winning second novel in Hilary Mantel’s magnificent trilogy about Thomas Cromwell and Henry VIII, in a gorgeous new edition to celebrate the trilogy’s completion with the #1 New York Times-bestselling The Mirror & the Light

“Bring Up the Bodies is astringent and purifying, stripping away the cobwebs and varnish of history. The English past comes to seem like something vivid, strange, and brand new. . . Fascinating and suspenseful.” —Charles McGrath, The New York Times Book Review

Though he battled for seven years to marry her, Henry is disenchanted with Anne Boleyn. She has failed to give him a son, and her intelligence and audacity alienate his old friends and the noble families of England. When the discarded Katherine dies, exiled from the court yet unwavering to the last in her convictions and her religion, the public turns on Anne—with Henry close behind.

At a word from Henry, Thomas Cromwell is ready to bring her down. Over three terrifying weeks, Anne is ensnared in a web of conspiracy, while the demure Jane Seymour stands waiting her turn, Cromwell advising each careful step she takes. Anne and her powerful family will not yield without a ferocious struggle, so to defeat the Boleyns, Cromwell must ally with his natural enemies, the papist aristocracy. But the responsibility for two queens’ demise now rests on his squared shoulders, and the voices of the dead are never far from his mind.

Hilary Mantel is the two-time winner of the Man Booker Prize for her best-selling novels, Wolf Hall, and its sequel, Bring Up the Bodies. Wolf Hall has been translated into 36 languages, Bring Up the Bodies into 31 languages, and sales for both books have reached over 5 million copies worldwide. In addition to the Wolf Holf trilogy, she is the author of A Place of Greater Safety, Giving Up the Ghost, The Assassination of Margaret Thatcher, Beyond Black, Every Day Is Mother’s Day, Vacant Possession, Eight Months on Ghazzah Street Fludd, A Change of Climate, An Experiment in Love, The Giant, O’Brien, and Learning to Talk.