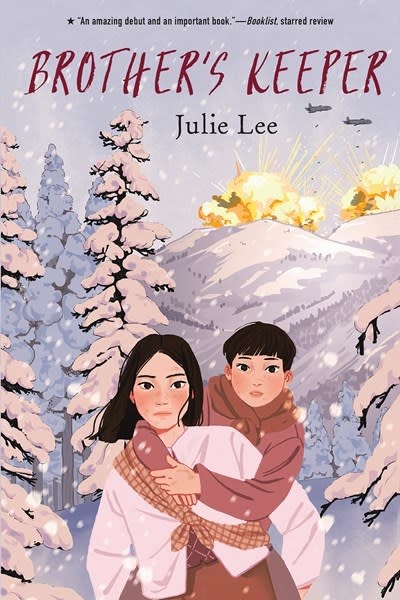 With war looming on the horizon and winter setting in, can two children escape North Korea on their own?

Winner of the Freeman Book Award!

Twelve-year-old Sora and her family live under an iron set of rules: No travel without a permit. No criticism of the government. No absences from Communist meetings. Wear red. Hang pictures of the Great Leader. Don’t trust your neighbors. Don’t speak your mind. You are being watched.

But war is coming, war between North and South Korea, between the Soviets and the Americans. War causes chaos—and war is the perfect time to escape. The plan is simple: Sora and her family will walk hundreds of miles to the South Korean city of Busan from their tiny mountain village. They just need to avoid napalm, frostbite, border guards, and enemy soldiers.

But they can’t. And when an incendiary bombing changes everything, Sora and her little brother Young will have to get to Busan on their own. Can a twelve-year-old girl and her eight-year-old brother survive three hundred miles of warzone in winter?

Haunting, timely, and beautiful, this harrowing novel from a searing new talent offers readers a glimpse into a vanished time and a closed nation.

A Bank Street Best Children’s Book of the Year!

Julie Lee, a marketer-turned-writer, lives in an Atlanta suburb with her three children and her husband. A first-generation American, her mother escaped North Korea during the Korean War and later immigrated to the United States. Julie studied history at Cornell before working in advertising in Manhattan, eventually relocating to the South.