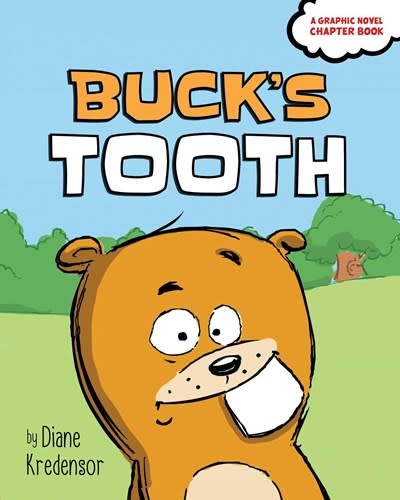 In this hilarious and relatable graphic novel chapter book, a big-toothed beaver learns to love his large front “toof” in an adorable tale of self-acceptance.

All beavers have flat tails, furry coats, and two front teeth. And then there’s Buck. Unlike the rest of his family, he has one gigantic front tooth—and he HATES it. It’s ruining everything for him, especially the annual talent show.

Whatever Buck tries to do for the contest—whistle, walk on stilts, blow bubbles—his tooth gets in the way. Will Buck ever learn to love what he hates the most, and embrace his inner tooth?

Diane Kredensor is an Emmy Award–winning artist, director, and producer for her work on animated TV shows such as Pinky and the Brain, Clifford the Big Red Dog, and WordWorld. She runs Tricycle Films, where she has created, developed, and contributed to programs for Nickelodeon, Warner Bros., the Disney Channel, PBS, MTV, and the Sesame Workshop. Diane happily lives in Brooklyn, New York, with her partner, their son, and two stinky cats. Visit her at DianeKredensor.com.