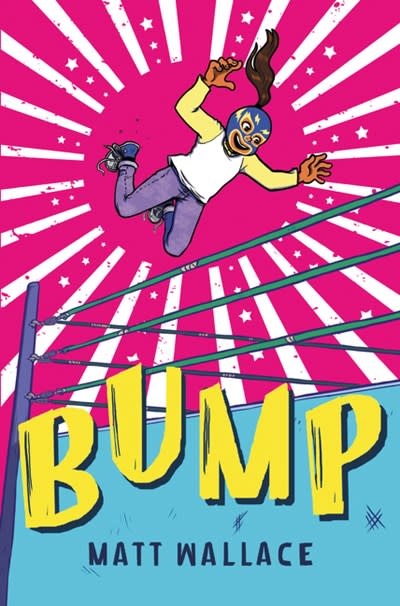 A moving and triumphant middle grade contemporary debut from award-winning author Matt Wallace about a heroic young girl—who dreams of becoming a pro wrestler—learning to find courage and fight for what she loves.

MJ knows what it means to hurt. Bruises from gymnastics heal, but big hurts—like her dad not being around anymore—don’t go away. Now her mom needs to work two jobs, and MJ doesn’t have friends at school to lean on.There is only one thing MJ loves: the world of professional wrestling. She especially idolizes the luchadores and the stories they tell in the ring. When a chance encounter with her neighbor Mr. Arellano reveals that he runs a wrestling school, MJ has a new mission in life: join the school, train hard, become a wrestler. Once MJ starts training at Victory Academy, she feels like the hurts in her life are beginning to heal.But trouble lies ahead. After wrestling in a showcase event, MJ attracts the attention of Mr. Arellano’s enemy at the State Athletic Commission. There are threats to shut the school down, putting MJ’s new home—and the community that welcomed her—at risk. What can MJ do to save her new family?

Matt Wallace is the Hugo–winning author of Rencor: Life in Grudge City, the Sin du Jour series, and Savage Legion. He’s also penned over one hundred short stories in addition to writing for film and television. In his youth he traveled the world as a professional wrestler, unarmed combat, and self-defense instructor before retiring to write full-time. He lives in Los Angeles with his wife, Nikki. You can visit him at www.matt-wallace.com.