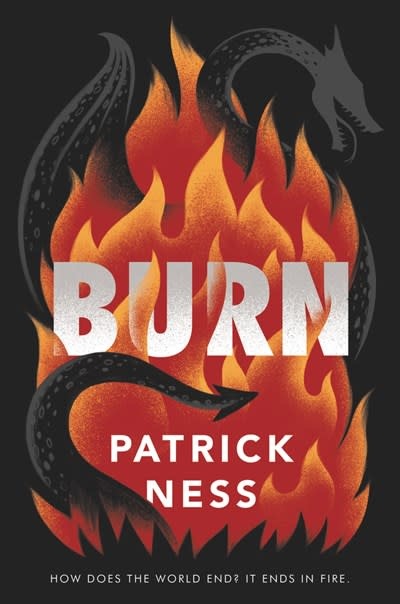 From the #1 New York Times-bestselling author of The Knife of Never Letting Go, A Monster Calls, and The Rest of Us Just Live Here comes a heart-stopping story set in a world almost our own, of fanaticism, improbable second chances, and hope and bravery in a world on the very brink of its own destruction.

On a cold Sunday evening in early 1957, Sarah Dewhurst waited with her father in the parking lot of the Chevron gas station for the dragon he’d hired to help on the farm . . .Sarah Dewhurst and her father, outcasts in their little town of Frome, Washington, are forced to hire a dragon to work their farm, something only the poorest of the poor ever have to resort to.The dragon, Kazimir, has more to him than meets the eye, though. Sarah can’t help but be curious about him, an animal who supposedly doesn’t have a soul, but who is seemingly intent on keeping her safe.Because the dragon knows something she doesn’t. He has arrived at the farm with a prophecy on his mind. A prophecy that involves a deadly assassin, a cult of dragon worshippers, two FBI agents in hot pursuit—and somehow, Sarah Dewhurst herself.

Patrick Ness is the author of ten previous novels and a short story collection. He’s best known for his books for young adults, including A Monster Calls, Release, the New York Times bestselling novel The Rest of Us Just Live Here, the Chaos Walking trilogy (soon to be a major motion picture starring Tom Holland and Daisy Ridley), and More Than This. He won the Carnegie Medal—the highest award for children’s books in the UK—twice in a row, for Monsters of Men and the #1 New York Times bestselling novel A Monster Calls. A Monster Calls was also the first book ever to simultaneously win the Carnegie Medal and the Kate Greenaway Medal for illustration. It was released as a motion picture with a screenplay by Patrick himself. Born in Virginia, Patrick lived in England for twenty years before relocating to Los Angeles.