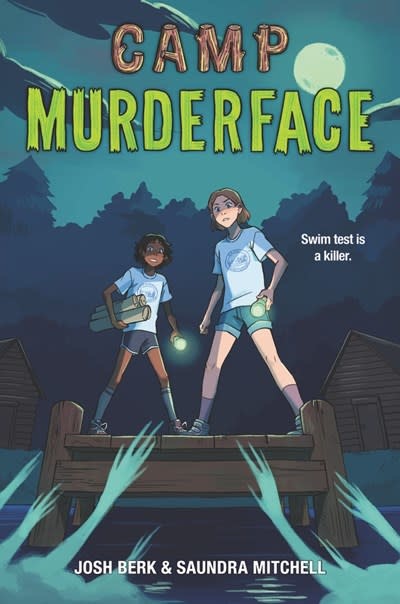 A long-abandoned—and long-haunted—summer camp sets the stage for the first in a playful middle grade horror series, perfect for fans of old school scare masters like R.L. Stine and Christopher Pike.

The year: 1983. The place: Ohio. The camp: Scary as heck.Camp Sweetwater is finally reopening, three decades after it mysteriously shut down. Campers Corryn Quinn and Tez Jones have each had more than enough of their regular lives—they’re so ready to take their summer at Sweetwater by storm.But before they can so much as toast one marshmallow, strange happenings start… happening. Can they survive the summer? Or will Camp Sweetwater shut down for good this time—with them inside?Summer camp turns sinister in this new duology, sure to spook and delight horror lovers and humor fans alike.

Josh Berk is the author of The Dark Days of Hamburger Halpin (Knopf), named a best book for teens in 2010 by Kirkus Reviews and Amazon.com. It was also awarded a Parent’s Choice Silver medal, a starred review from School Library Journal, and a perfect 10 from VOYA. His second comedy/mystery teen novel: Guy Langman: Crime Scene Proscrastinator, was published in 2012 (also by Knopf). In 2013, a new series for younger readers began with Strike Three, You’re Dead. He has previously been a journalist, a poet, a playwright, and a guitarist (mostly in bands known for things other than fine guitar playing). He is a librarian and lives in Bethlehem, PA, with his family.Saundra Mitchell has been a phone psychic, a car salesperson, a denture deliverer, and a layout waxer. She’s dodged trains, endured basic training, and hitchhiked from Montana to California. The author of nearly twenty books for tweens and teens, Mitchell’s work includes Shadowed Summer; the Vespertine series; All the Things We Do in the Dark, a novel forthcoming from HarperTeen; and the forthcoming Camp Murderface series with Josh Berk. She is the editor of three anthologies for teens, Defy the Dark, All Out, and All Out Now. She always picks truth; dares are too easy.