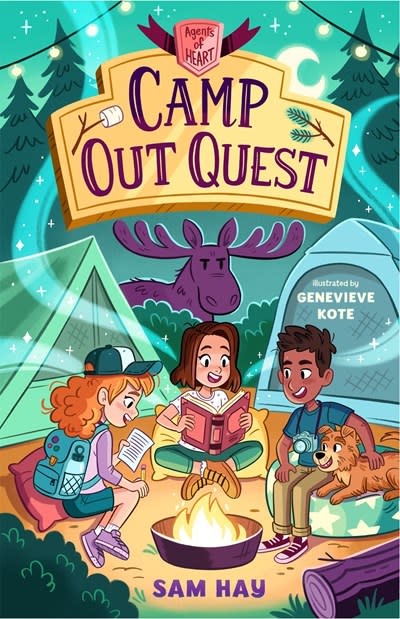 In this second book in the fun, magical illustrated chapter book series from Sam Hay, author of Spy Penguins, a young girl goes camping with her family and enlists the help of friends and fairytale princesses in a quest to get her stepmother to fall in love with the stray puppy she wants to keep.

The Agents of H.E.A.R.T are at it again!

Now that she’s gotten her happily ever after helping out in her family’s café, Evie has one last wish—to keep Fudge, the adorable stray puppy she found. Fudge is extra cute . . . and extra wiggly . . . and may have made a mess of the house.

But Evie has a plan. Nothing says family and bonding like camping in the great outdoors. And with her friends coming too, Operation Love Fudge will be a piece of cake—or a delicious gooey s’more!

In the second book in this fantastically funny series by Spy Penguins author, Sam Hay, Evie and her friends return for a chaotic romp through the forest featuring an easily excitable pup, a fiasco of fairytale princesses, and the power of teamwork.

Sam Hay is the author of more than forty books for children including the Spy Penguins series, the Undead Pets series, Star in the Jar, and the Stella and the Night Sprites series. Raised in Scotland and trained as a journalist in Edinburgh, Sam became a full-time writer when her first baby was born and now lives in Wales with her husband and two children.