Home » Can We Please Give the Police Department to the Grandmothers? 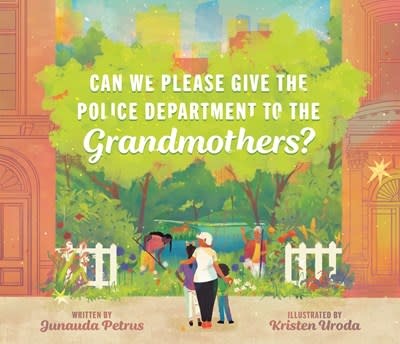 Can We Please Give the Police Department to the Grandmothers?

Based on the viral poem by Coretta Scott King honoree Junauda Petrus, this picture book debut imagines a radicially positive future where police aren’t in charge of public safety and community well-being.

Petrus first published and performed this poem after the shooting of Michael Brown in Ferguson, Missouri in 2014. With every subsequent police shooting, it has taken on new urgency, culminating in the 2020 murder of George Floyd by a Minneapolis police officer, blocks from Junauda's home.

In its picture book incarnation, Can We Please Give the Police Department to the Grandmothers? is a joyously radical vision of community-based safety and mutual aid. It is optimisitic, provocative, and ultimately centered in fierce love. Debut picture book artist Kristen Uroda has turned Junauda's vision for a city without precincts into a vibrant and flourishing urban landscape filled with wise and loving grandmothers of all sorts.

Junauda Petrus is a writer, pleasure activist, filmmaker and performance artist, born on Dakota land of Black-Caribbean descent. Her work centers around wildness, queerness, Black-diasporic-futurism, ancestral healing, sweetness, shimmer and liberation. Her debut novel, The Stars and the Blackness Between Them, earned a Coretta Scott King honor. She lives in Minneapolis with her wife and family.

Kristen Uroda specializes in editorial illustration and works as a design researcher at Civilla, a Detroit-based design studio dedicated to changing the way public-serving institutions work using human-centered design thinking and design research. This is her first picture book.