Home » Can We Talk About Israel?: A Guide for the Curious, Confused, and Conflicted 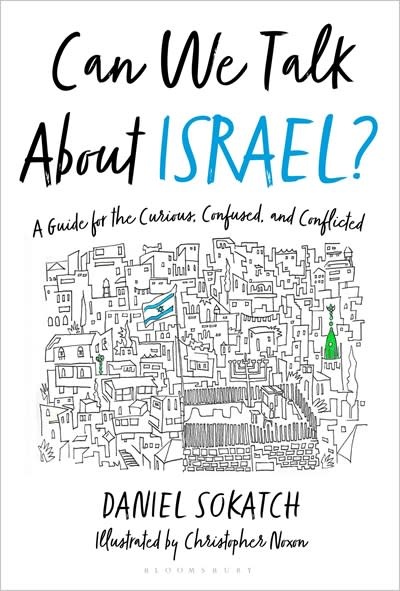 Can We Talk About Israel?: A Guide for the Curious, Confused, and Conflicted

From the expert who understands both sides of the world’s most complex, controversial conflicts, a modern-day Guide for the Perplexed—a primer on Israel and the Israeli-Palestinian issue.

"Can’t you just explain the Israel situation to me? In, like, 10 minutes or less?” This is the question Daniel Sokatch is used to answering on an almost daily basis. As the head of the New Israel Fund, which is dedicated to equality and democracy for all Israelis (not just Jews), Sokatch is supremely well-versed on the Israeli conflict.

Can We Talk About Israel? is the story of that conflict, and of why so many people feel so strongly about it without actually understanding it very well at all. It is an attempt to understand a century-long struggle between two peoples that both perceive themselves as (and indeed are) victims. And it’s an attempt to explain why Israel (and the Israeli-Palestinian conflict) inspires such extreme feelings — why it seems like Israel is the answer to “what is wrong with the world” for half the people in it, and “what is right with the world” for the other half. As Sokatch asks, is there any other topic about which so many intelligent, educated and sophisticated people express such strongly and passionately held convictions, and about which they actually know so little?

Easy-to-read yet fiercely penetrating and original, Can We Talk About Israel? is a digestible yet thoughtful and surprisingly comprehensive look at Israel and the Israeli-Palestinian conflict. Christopher Noxon’s engaging illustrations assist in explaining the history and basic contours of the most complicated conflict in the world.

Daniel Sokatch is the chief executive officer of the New Israel Fund. He served as the executive director of the Progressive Jewish Alliance and the Jewish Community Federation of San Francisco, the Peninsula, Marin and Sonoma Counties. Sokatch has four times been named to the Forward’s “Forward 50,” an annual list of the fifty leading Jewish decision-makers and opinion-shapers. His writing has appeared in the New York Times, Washington Post, Los Angeles Times, and other publications. He lives in San Francisco.

Christopher Noxon (illustrator) is a journalist and illustrator whose work has appeared in the New Yorker, the Atlantic, the New York Times Magazine, Salon, and his book Good Trouble: Lessons from the Civil Rights Playbook. He writes and draws in Ojai, California.