Home » Can't Take That Away 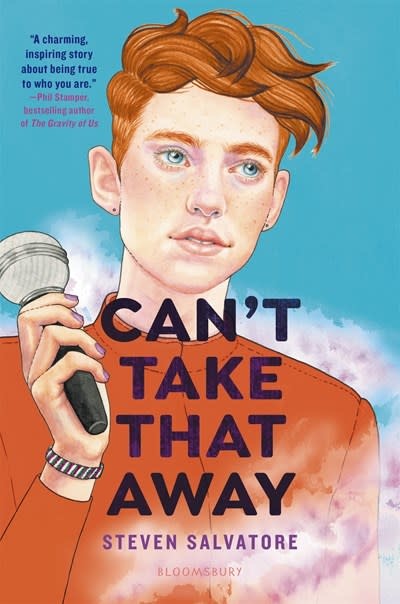 Can't Take That Away

A powerful debut about a genderqueer teen finding the courage to stand up and speak out when discriminated against by their high school administration.

All Carey Parker wants is to be a star. But the world sees Carey as a guy, not a Mariah, Beyoncé, or Gaga. Despite the support they have from friends and family, it’s hard for Carey to find their voice when no one else seems to hear them.

Enter Cris, who understands Carey in ways nobody has before. With Cris’s support, Carey finds the confidence to rise above the pain of past trauma to audition for the school musical… and lands the female lead. But when a homophobic teacher gets wind of the “non-traditional” casting, Carey is ousted from the show.

Except Carey won't be silenced. They will defend their right to the role and fight the injustices of the school administration… and they’ll stop at nothing to rally their school to do it in this powerful and uplifting novel from a talented new YA author.

Steven Salvatore is a gay, genderqueer author, educator, Mariah Carey lamb, and Star Wars fanatic who spends most days daydreaming and making up stories. They have an MFA in Creative Writing from The New School. They were formerly a full-time Assistant Professor of Composition and Director of the Writing Center at The College of New Rochelle. After the college permanently closed in 2019, they took a step back from teaching full-time to focus on their writing, though they do still teach at a few colleges while running a writing workshop at The LOFT, an LGBT resource center in White Plains, NY. Steven currently lives in Peekskill, NY, with their amazingly patient husband, whose name is also Steve. stevensalvatore.com • @StevenSSWrites