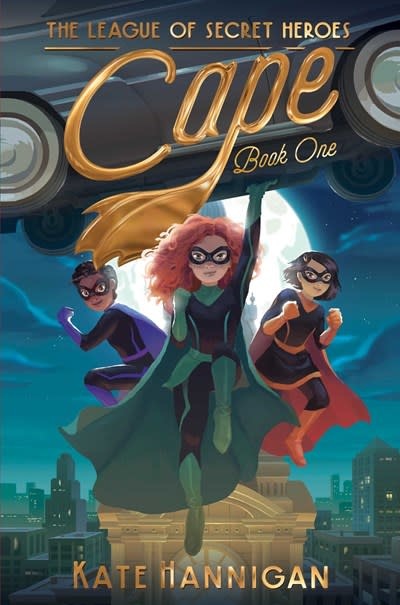 “Readers…will be enamored by this blend of history, mystery, and superpowered action.” —Booklist (starred review)

“Has the exciting pace of a superhero adventure.” —Kirkus Reviews

Hidden Figures meets Wonder Woman in this action-packed, comic-inspired adventure about a brilliant girl puzzler who discovers she’s part of a superhero team—the first in a new series!

Josie O’Malley does a lot to help out Mam after her father goes off to fight the Nazis, but she wishes she could do more—like all those caped heroes who now seem to have disappeared. If Josie can’t fly and control weather like her idol, Zenobia, maybe she can put her math smarts to use cracking puzzles for the government.

After an official tosses out her puzzler test because she’s a girl, it soon becomes clear that an even more top-secret agency has its eye on Josie, along with two other applicants: Akiko and Mae. The trio bonds over their shared love of female superhero celebrities, from Hauntima to Zenobia to Hopscotch. But during one extraordinary afternoon, they find themselves transformed into the newest (and youngest!) superheroes in town. As the girls’ abilities slowly begin to emerge, they learn that their skills will be crucial in thwarting a shapeshifting henchman of Hitler, and, just maybe, in solving an even larger mystery about the superheroes who’ve recently gone missing.

Inspired by remarkable real-life women from World War II—the human computers and earliest programmers called “the ENIAC Six”—this pulse-pounding adventure features bold action and brave thinking, with forty-eight pages of comic book style graphic panels throughout the book. Readers will want to don their own capes for an adventure, and realize they have the power to be a superhero, too!

Kate Hannigan is a noted author with a special passion for stories that empower girls and women. Her picture book biography, A Lady Has the Floor, received four starred reviews and was named a Junior Library Guild Selection. In addition to the 2016 Golden Kite Award for Middle Grade Fiction, The Detective’s Assistant also received two starred reviews and was a Booklist Editor’s Choice, among many other accolades. Hannigan recently presented at NCTE on “Our Mighty Girls,” about girl power in middle grade fiction, and was a judge for 2018’s Golden Kite Awards. Between her active presence on social media (@KateChicago), her work as founder of the Hyde Park/South Side Chicago chapter of SCBWI, and as a busy conference speaker, Kate is an involved, vocal, and respected member of the kid lit community. Visit her online at KateHannigan.com.

Patrick Spaziante is an American comic book artist and children’s book illustrator known for his work for Archie Comics, in particular his interior pencil and cover work for Sonic the Hedgehog, Sonic X, and Sonic Universe.