Home » Carol and the Pickle-Toad 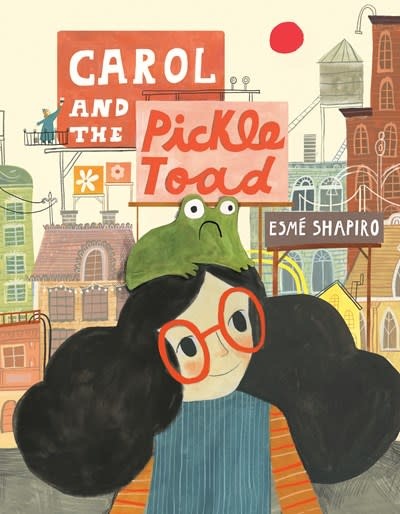 Carol is tired of listening to her bossy toad hat—until a pigeon carries it away! This delightful picture book from Ooko creator Esmé Shapiro is a quirky and funny fable about overcoming self-doubt and finding your inner voice.

In the big city, people wear all kinds of hats. Not everyone wears a toad as a hat, but some people do…and some of those toad hats can be VERY bossy! Carol has always followed the orders of her demanding toad hat at the expense of her own inner voice. But when her toad hat is plucked away by a pigeon, how will Carol know what to do? After spending so long being told what to eat and do and paint, Carol’s not sure what SHE wants, and nothing feels quite right. Feeling lost, she creates a new hat—a toad made out of pickles and eggs—to help guide her. Even though her new pickle-toad doesn’t make a sound, Carol can hear it loud and clear! But when a pigeon takes away THAT hat too, Carol begins to understand that there is a big, booming voice that lives inside herself…and that it’s well worth listening to!

For any reader who’s doubted their own voice and talents, or felt like a bossy friend or family member is always drowning them out, Carol and the Pickle-Toad is an inspiring invitation to listen to your own heart and stand on your own two feet—even better if you’re wearing very tall boots.

ESMÉ SHAPIRO grew up in Laurel Canyon, California and Ontario, Canada. Currently she and her dog, Chebini Brown, split their time between Brooklyn and New York’s Hudson Valley. A graduate of The Rhode Island School of Design, Esmé is a past recipient of both the Nancy Lee Rhodes Roberts Scholarship and The SILA West 53 Gold Award-Phillip Hayes Scholarship. She has previously written and illustrated Ooko, which was nominated for a Governor General’s Literary Award in 2016, and Alma and the Beast, which received two starred reviews. She illustrated Yak and Dove by Kyo Maclear and Eliza: The Story of Elizabeth Schuyler Hamilton by Margaret McNamara. She has exhibited at The Society of Illustrators, and her work has been featured in Taproot and Plansponsor magazines. Connect with her online at esmeshapiroillustration.com and Instagram @esmeshapiro.