Home » Carrimebac, the Town That Walked 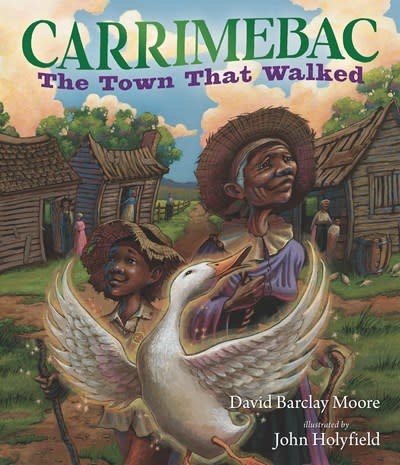 Carrimebac, the Town That Walked

In a boldly transportive original tale, David Barclay Moore infuses history with wry folk wisdom, metaphorical power, and a splash of magic. The Civil War may be over, but times are not substantially improved for the freed Black citizens of Walkerton, Georgia, who are shunned by the white folks of the surrounding towns. One day, though, ol’ Rootilla Redgums and her grandson, Julius Jefferson, arrive. Rootilla teaches the citizens of Walkerton how to make all sorts of beautiful things, and the white people can’t get enough. But some aren’t so happy. When a hooded mob threatens to burn down the town, Julius and Rootilla must work wonders to protect Walkerton and its people—even if it means moving heaven and earth itself. With exquisite cinematic illustrations by John Holyfield and a generous trim size, this portrait of Black endurance draws on the rhythms and traditions of African American storytelling to open a powerful window into the past.

David Barclay Moore, an author and filmmaker, won a John Steptoe New Talent Author Award for his debut novel, The Stars Beneath Our Feet, which was optioned as a film by Michael B. Jordan. Born and raised in Missouri, he has done work with Sony, Harlem Children’s Zone, and Quality Services for the Autism Community. David Barclay Moore is based in Brooklyn.

John Holyfield is a renowned fine artist and illustrator of numerous books for young readers, including Belle, the Last Mule at Gee’s Bend by Calvin Alexander Ramsey and Bettye Stroud, Meet Miss Fancy by Irene Latham, Mahalia Jackson: Walking with Kings and Queens by Nina Noland, and The Hallelujah Flight by Phil Bildner. John Holyfield lives in Virginia.