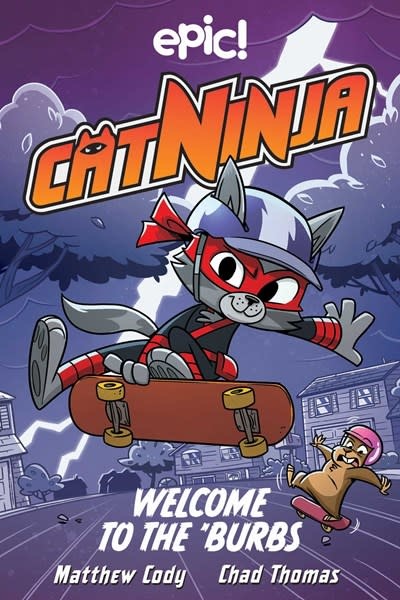 Cat Ninja: Welcome to the 'Burbs

Everyone’s favorite feline superhero is back for even more hilarious adventures set in the Cat Ninja-verse. Catch up with Cat Ninja, Master Hamster, and the rest of the family as they face...the suburbs!

When Dad buys a new house outside the city, the kids are less than excited about new neighbors, backyard barbecues, and quiet, tree-lined streets. And they’re not alone—a summer in the suburbs is enough to make Cat Ninja miss the villains of Metro City!

Our hero and his family feel like fish out of water when they arrive in Peaceful Valley, but it won’t be long before Dad’s new neighborhood reveals its scaly, golden underbelly.

Matthew Cody is the author of several popular books, including the award-winning Supers of Noble’s Green trilogy: Powerless, Super, and Villainous. He is also the author of Will in Scarlet and The Dead Gentleman, as well as the graphic novels Zatanna and the House of Secrets from DC Comics and Bright Family from Epic/Andrews McMeel. He lives in Manhattan, New York, with his wife and son.

Chad Thomas is an illustrator and cartoonist living with his family in McKinney, Texas. He’s worked on books such as TMNT, Star Wars Adventures, and Mega Man and also illustrates activity and educational books. He loves his family, comic books, and Star Wars and will let his children beat him in checkers but never in Mario Kart.

Warren Wucinich is a comic book creator and part-time carny who has been lucky enough to work on projects such as Invader ZIM, Bright Family, and Courtney Crumrin. He is also the co-creator of the YA graphic novel Kriss: The Gift of Wrath. He currently resides in Dallas, Texas, where he spends his time making comics, rewatching '80s television shows, and eating all the tacos.