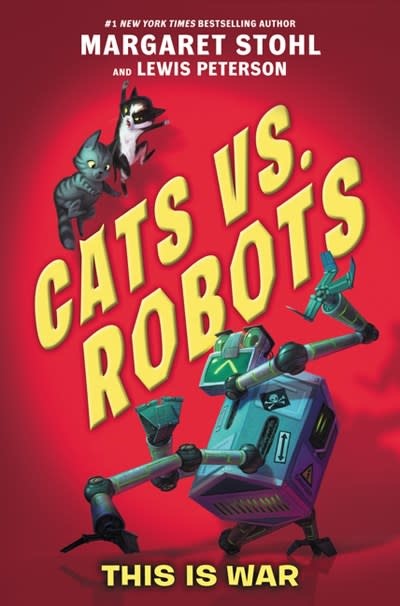 #1 New York Times bestselling author Margaret Stohl and her husband, Lewis Peterson, deliver the first in a laugh-out-loud middle-grade series about the eternal conflict between cats and robots – and a solution that offers a non-binary option for all involved. What happens when the best answer to war is not to have a war at all? Now in paperback!

The Robot Federation and the Feline Empire have been at war for so long, no one remembers how or why it started. But now that fight is coming to a tiny primitive planetoid . . . a blue speck called Earth. The mission for both cats and robots: retrieve the Singularity Chip. With the chip, cats can live past their nine lives, and robots are granted eternal battery life.

Meanwhile, twin siblings Max and Min Wengrod are as different as can be—their parents may be the only things they have in common. Min always gets good grades, and she loves to read and build robots. Max hates school, and he prefers to draw, and spend time online with friends. When Max rescues two kittens and is determined to keep them, Min is horrified that these furballs could interfere with her chances at the Battle of the Bots competition. But hidden forces are at play in their own house, and the larger war between cats and robots is fast approaching. The twins must put aside their differences and realize that the best decision between technology and biology might be none at all.