Home » Change: Why It Fails and How It Can Succeed 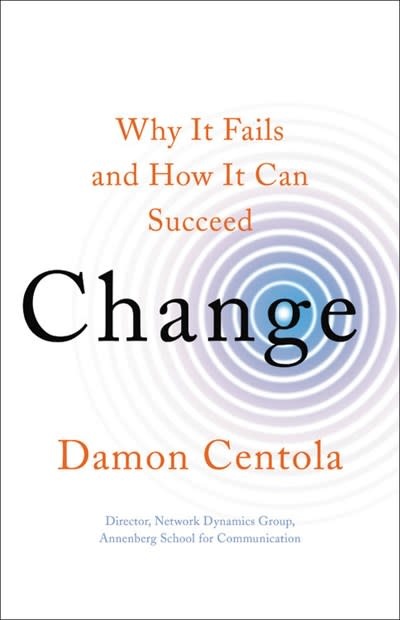 A bold and paradigm-busting new theory about the complex way ideas, movements, and behaviors spread, and how to efficiently effect the change you want to see in the world — for readers of Malcolm Gladwell, Richard Thaler, and Cass Sunstein.

Most of what we know about how ideas spread comes from bestselling authors who give us a compelling picture of a world, in which "influencers" are king, "sticky" ideas "go viral," and good behavior is "nudged" forward. The problem is that the world they describe is a world where information spreads, but beliefs and behaviors stay the same.

When it comes to lasting change in what we think or the way we live, the dynamics are different: beliefs and behaviors are not transmitted from person to person in the simple way that a virus is. The real story of social change is more complex. When we are exposed to a new idea, our social networks guide our responses in striking and surprising ways.

Drawing on deep-yet-accessible research and fascinating examples from the spread of coronavirus to the success of the Black Lives Matter movement, the failure of Google+, and the rise of political polarization, Change presents groundbreaking and paradigm-shifting new science for understanding what drives change, and how we can change the world around us.

Damon Centola is a Professor in the Annenberg School for Communication and the School of Engineering and Applied Sciences at the University of Pennsylvania, where he is Director of the Network Dynamics Group. His widely cited work has been published across several disciplines in the world's leading journals, including Science, The Proceedings of the National Academy of Sciences, Nature Human Behavior, The American Journal of Sociology, and Journal of Statistical Physics. His speaking and consulting clients include Amazon, Microsoft, Apple, Cigna, the Smithsonian Institution, the American Heart Association, the National Academies, the U.S. Army and the NBA. Popular accounts of Damon's work have appeared in the New York Times, Washington Post, CNN, Wall Street Journal, Wired, TIME, The Atlantic, and Scientific American.