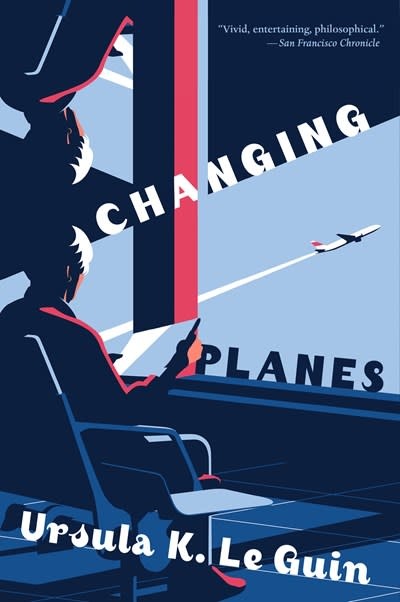 Winner of the PEN/Malamud Award for Short Story

In these “vivid, entertaining, philosophical dispatches” (San Francisco Chronicle), literary legend Le Guin weaves together influences as wide-reaching as Borges, The Little Prince, and Gulliver’s Travels to examine feminism, tyranny, mortality and immortality, art, and the meaning—and mystery—of being human.

Sita Dulip has missed her flight out of Chicago. But instead of listening to garbled announcements in the airport, she’s found a method of bypassing the crowds at the desks, the nasty lunch, the whimpering children and punitive parents, and the blue plastic chairs bolted to the floor: she changes planes.

Changing planes—not airplanes, of course, but entire planes of existence—enables Sita to visit societies not found on Earth. As “Sita Dulip’s Method” spreads, the narrator and her acquaintances encounter cultures where the babble of children fades over time into the silence of adults; where whole towns exist solely for holiday shopping; where personalities are ruled by rage; where genetic experiments produce less than desirable results. With “the eye of an anthropologist and the humor of a satirist” (USA Today), Le Guin takes readers on a truly universal tour, showing through the foreign and alien indelible truths about our own human society.

URSULA K. LE GUIN was born in Berkeley, California, in 1929, and passed away in Portland, Oregon, in 2018. She published over sixty books of fiction, nonfiction, poetry, drama, children's literature, and translation. She was the recipient of a National Book Award, six Hugo and five Nebula awards, and was inducted into the American Academy of Arts and Letters.

KAREN JOY FOWLER is the author of six novels and four short story collections, including We Are All Completely Beside Ourselves and Black Glass. She is the winner of the 2014 PEN/Faulkner Award, a finalist for the Man Booker Prize, and has won numerous Nebula and World Fantasy Awards.ERIC BEDDOWS has won the Amelia Frances Howard-Gibbon Award and the Governor General's Literary Award, among others.