Home » Chasing Me to My Grave 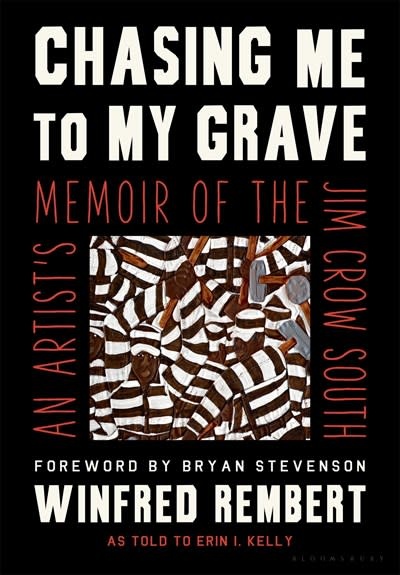 Chasing Me to My Grave

An artist’s odyssey from Jim Crow–era Georgia to the Yale Art Gallery—a stunningly vivid, full-color memoir in prose and painted leather, with a foreword by Bryan Stevenson.

Winfred Rembert grew up in a family of Georgia field laborers and joined the Civil Rights Movement as a teenager. He was arrested after fleeing a demonstration, later survived a near-lynching at the hands of law enforcement, and spent the next seven years on chain gangs.

During that time he met the undaunted Patsy, who would become his wife. Years later, at the age of 51 and with Patsy’s encouragement, he started drawing and painting scenes from his youth using leather tooling skills he learned in prison.

Chasing Me to My Grave presents Rembert’s breathtaking body of work alongside his story, as told to Tufts Philosopher Erin I. Kelly. Rembert calls forth vibrant scenes of Black life on Cuthbert, Georgia’s Hamilton Avenue, where he first glimpsed the possibility of a life outside the cotton field. As he pays tribute, exuberant and heartfelt, to Cuthbert’s Black community and the people, including his wife, Patsy, who helped him to find the courage to revisit a traumatic past, Rembert brings to life the promise and the danger of Civil Rights protest, the brutalities of incarceration, his search for his mother’s love, and the epic bond he found with Patsy.

Vivid, confrontational, revelatory, and complex, Chasing Me to My Grave is a searing memoir in prose and paintings that celebrates Black life and summons readers to confront painful and urgent realities at the heart of American history and society

Winfred Rembert’s artwork, exhibited at museums and galleries around the country and represented by the Adelson Galleries in New York, has been compared to the work of Jacob Lawrence, Horace Pippin, and Romare Bearden and was the subject of an exhibition at the Yale University Art Gallery. Rembert lives and works in New Haven, Connecticut.

Erin I. Kelly is a professor of philosophy at Tufts University. She lives in Massachusetts.