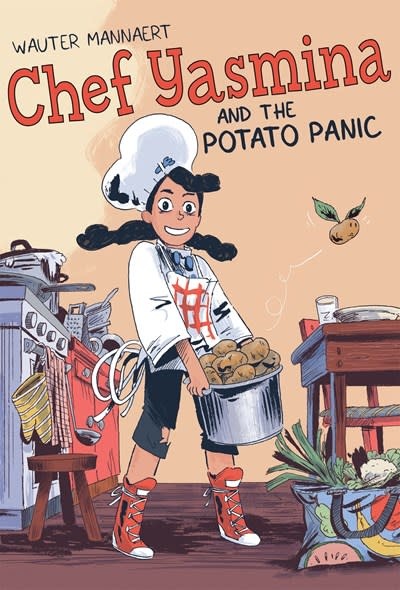 Chef Yasmina and the Potato Panic

In this silly, action-packed middle-grade graphic novel, a young chef is the only one who can protect her town from an onslaught of scientifically enhanced, highly addictive potatoes.

Eleven-year-old Yasmina and her single dad lead a modest life in a cramped apartment in a bustling city. But even though money is tight, they eat like kings. Every day, Yasmina uses her cookbooks and fresh vegetables from the community garden to whip up gourmet meals. That is, until the day the garden is bulldozed and replaced by a field of scientifically enhanced potatoes that are, quite literally, addictive! The whole city—and even Yasmina's dad—is going mad for these potatoes. And what's more, they're slobbering, chasing cats, and howling at the moon!

What's the secret ingredient in these potatoes that has everyone acting like a bunch of crazy canines? Yasmina needs to find a cure, and fast!

Wauter Mannaert, born in 1978, has a master's degree in film and animation from the Saint-Luc Arts Institute in Brussels, which he obtained in 2002. He currently works in the Belgian capital as a graphic novelist, illustrator, and cartoonist. Following his studies, and before turning toward comics, he specialized in media education and worked for years with youth in one of Brussels’ most deprived neighborhoods. In 2015, his graphic novel El Mesías (written by Mark Bellido) was published in Dutch by Ballon, joining the Europe Comics catalog in English in 2017.