Home » Children of the Stone City 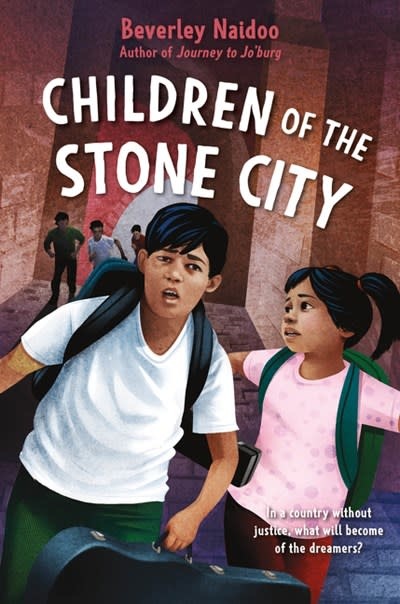 Children of the Stone City

Inspired by the many inequalities that exist in our world, this astonishing novel by Carnegie Medal–winning author Beverley Naidoo is in turns heart-wrenching, infuriating, and inspiring—and at its core, a call to readers to make a better world than they have found.

Their country is a cage. Will they be able to fly free?Adam and his sister, Leila, are Nons—second-class citizens, living under the Permitted ruling class. Though their life in the Stone City is filled with family, stories, and music, they must carefully follow the rules, have all paperwork on hand, and never, ever do anything to anger a Permitted. When their father unexpectedly dies, they are even restricted in how they are allowed to grieve.      Soon, Adam and Leila are back to school and practicing music again. But when Adam’s friend Zak plays a bold prank on a group of Permitted boys, and Adam is implicated in Zak’s “crime,” Adam knows their lives will never be the same again.Not to be missed by any reader who was moved by Veena Hiranandani’s The Night Diary or Alan Gratz’s Refugee.

Beverley Naidoo wrote her first children’s book, Journey to Jo’burg, inspired by her time in the resistance to apartheid as a student in South Africa. She is also the author of the Carnegie Medal winner The Other Side of Truth, its sequel, Web of Lies, and the other award-winning books Out of Bounds, No Turning Back, and Burn My Heart. She has a PhD and has received a number of honorary doctorates for her body of work. Visit her online at www.beverleynaidoo.com.