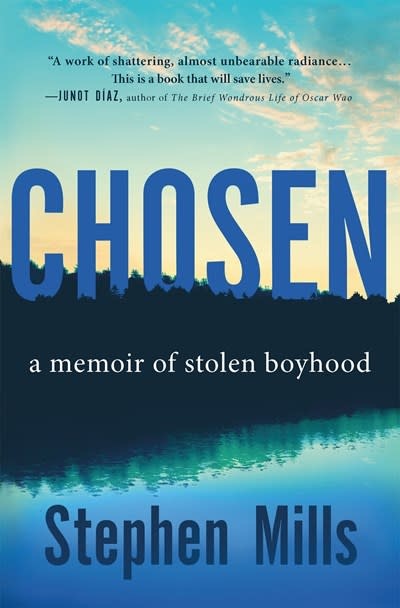 Chosen: A Memoir of Stolen Boyhood

"An unparalleled achievement, a work of shattering, almost unbearable radiance. I did not stop crying throughout. For Mills. For my young self. For all of us who have lived and continue to live in that pitiless abyss of childhood abuse. To read this courageous book is to be transformed utterly by Mills's empathy, resilience, and grace. Mark my words: Chosen is destined to be a classic because this is a book that will save lives."

At thirteen years old, Stephen Mills is chosen for special attention by the director of his Jewish summer camp, a charismatic social worker intent on becoming his friend. Stephen, whose father died when he was four, places his trust in this authority figure, who first grooms and then molests him for two years.

Stephen tells no one, but the aftershocks rip through his adult life, as intense as his denial: self-loathing, drug abuse, petty crime, and horrific nightmares, all made worse by the discovery that his abuser is moving from camp to camp, state to state, molesting other boys. Only physical and mental collapse bring Stephen to confront the truth of his boyhood and begin the painful process of recovery—as well as a decades-long crusade to stop a serial predator, find justice, and hold to account those who failed the children in their care.

The trauma of sexual abuse is shared by one out of every six men, yet very few have broken their silence. Unflinching and compulsively readable, Chosen eloquently speaks for those countless others and their families. It is a rare act of consummate courage and generosity—the indelible story of a man who faces his torment and his tormentor and, in the process, is made whole.

Stephen Mills is the coauthor with Roger Fouts of Next of Kin: My Conversations with Chimpanzees, a Los Angeles Times Best Book of the Year. He has advised and written for an array of public interest organizations in the fields of human rights, civil liberties, and the environment. Since 1983, he has worked with the Natural Resources Defense Council, building campaigns that have mobilized millions of people in support of environmental protection. Stephen is honored to serve as an Ambassador for CHILD USA, the leading nonprofit think tank fighting for the civil rights of children. He lives in California with his wife, Susan.