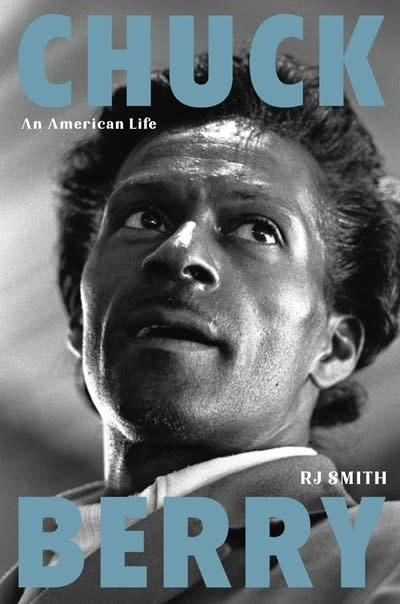 The definitive biography of Chuck Berry, legendary performer and inventor of rock and roll and author of classics like “Johnny B. Goode,” “Maybellene,” “You Never Can Tell,” and “Roll Over Beethoven.”

Chuck Berry long ago earned a reputation as a person who gave nothing away. Best known as the groundbreaking innovator of rock and roll and the artist behind classics ranging from “Johnny B. Goode” and “Maybellene” to “You Never Can Tell” and “Roll Over Beethoven,” he could be a difficult man to be around off-stage, and was extremely closed off in interviews. There was the work, and then there was the man, who was not easily given to describing the work—and definitely not interested in talking about himself. Though the major events of his life are known and have been described in the hundreds of tributes that marked his passing, the secretive complexity that encapsulated his life and underscored his music has never been fully explored—until now.

In Chuck Berry, biographer RJ Smith crafts a comprehensive portrait of one of the great American artists, entertainers, guitarists, and lyricists of the 20th century, bringing Chuck Berry to life in vivid detail. Based on interviews, archival research, legal document analysis, and a deep understanding of Berry’s St. Louis (the place where he was born, the place he never left, and the place he died in March 2017), Smith sheds new light on a man that few people have ever really understood. By studying his life, especially within the context of the American culture he made and eventually sought to withdraw from, we better understand how he became such a groundbreaking figure in music, erasing racial boundaries and paying a great price for his success. While celebrating his accomplishments, the book also does not shy away from troubling aspects of his public and private life, and asks profound questions about how and why we separate the art from the artist. Should we?

Berry always said that what he did was make money. He often declined to describe himself as an artist only admitting he was good at what he did to get reporters off his back. But the man's artistry was the rarest kind, the kind that had social and political resonance, the kind that made America want to get up and dance. At long last, Chuck Berry brings the man and the music together.

RJ Smith has been a senior editor at Los Angeles Magazine, a contributor to Blender, a columnist for The Village Voice, a staff writer for Spin, and has written for GQ, New York Times Magazine, Elle, and Men's Vogue. His book The One: The Life and Music of James Brown was among the New York Times' "100 Notable Books of 2012." Smith lives with his wife and daughter in Los Angeles, California.