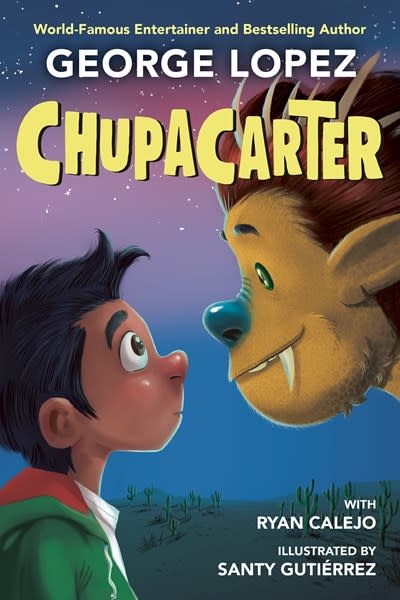 In this illustrated contemporary fantasy, twelve-year-old Jorge is lonely and resentful after being sent to live with his grandparents. His first day at his new school doesn’t go well after catching the attention of his belligerent principal and the school bullies, so Jorge might be a little desperate for a friend.

But the only kid who shares his interest in junk food and games turns out to be a young chupacabra—a legendary monster whose kind is known for being bloodthirsty livestock killers. The truth is, Carter is anything but savage—he's kind, a good listener, and has great taste in sneakers. Being friends with a mythical creature should be amazing, but when local cattle turn up dead and his principal suspects the truth, Jorge is torn. Should he trust that his friend is innocent and protect him from exposure, or reveal his dangerous existence and change the world forever?

George Lopez's multi-faceted career encompasses television, film, standup comedy, and late-night programming. He co-created, wrote, produced, and starred in his own hit sitcom George Lopez, a groundbreaking show that was one of the few with a Hispanic star. Lopez can be seen most recently in his Netflix original comedy special, We'll Do It for Half. His autobiography Why You Crying? was a New York Times bestseller. He has received a star on the Hollywood Walk of Fame, was named one of the 25 Most Influential Hispanics in America by TIME magazine, and one of the Top Ten Favorite Television Personalities by Harris Poll.

Ryan Calejo is an award-winning author born and raised in south Florida. His critically acclaimed Charlie Hernandez series has been featured in half a dozen state reading lists, and is a two-time gold medal winner of the Florida Book Awards.