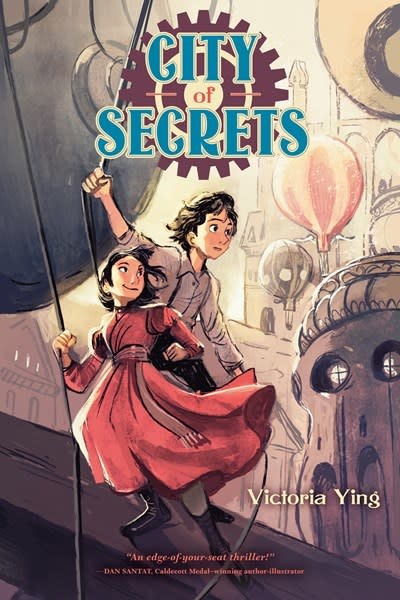 Ever Barnes is a shy orphan guarding a secret in an amazing puzzle box of a building.

Most of the young women who work at the building’s Switchboard Operating Facility, which connects the whole city of Oskar, look the other way as Ever roams around in the shadows. But one of them, Lisa, keeps an eye on the boy. So does the head of the Switchboard, Madame Alexander…a rather sharp eye.

Enter Hannah, the spunky daughter of the building’s owner. She thinks Ever needs a friend, even if he doesn’t know it yet.

Good thing she does!

Lisa and Madame Alexander are each clearly up to something.

Ever is beset by a menacing band of rogues looking to unlock the secret he holds—at any cost.

And whatever is hidden deep in the Switchboard building will determine all of their futures.

On a journey that twists and turns as much as the mechanical building Ever Barnes calls home, he and his new friend Hannah have to ­ and out what’s really going on in this mysterious city of secrets…or else!

Series Overview: Secret of the Switchboard is the first of two books in a series, set in the same world with the same main characters.

Victoria Ying is a developmental artist whose clients include Disney Studios and SONY, among others. She has worked on major films such as Frozen, Tangled, Big Hero 6, Moana, and Wreck-It Ralph. She also is illustrating DC’s new middle-grade Wonder Woman graphic novel series, Diana: Princess of the Amazons.

Secret of the Switchboard is her first original graphic novel. Visit her at www.victoriaying.com.