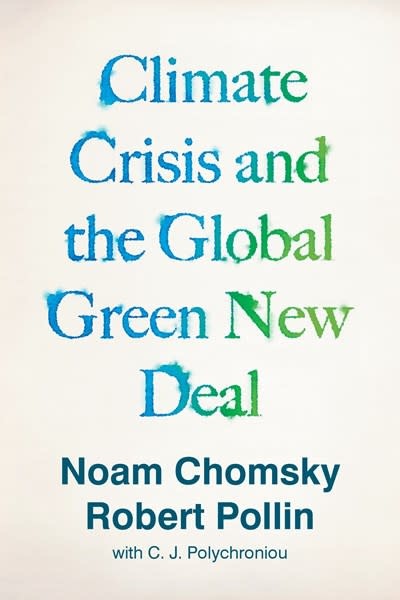 Together, Chomsky and Pollin show how the forecasts for a hotter planet strain the imagination: vast stretches of the Earth will become uninhabitable, plagued by extreme weather, drought, rising seas, and crop failure. Arguing against the misplaced fear of economic disaster and unemployment arising from the transition to a green economy, they show how this bogus concern encourages climate denialism.

Humanity must stop burning fossil fuels within the next thirty years and do so in a way that improves living standards and opportunities for working people. This is the goal of the Green New Deal and, as the authors make clear, it is entirely feasible. Climate change is an emergency that cannot be ignored. This book shows how it can be overcome both politically and economically.

Noam Chomsky is Institute Professor Emeritus at the Massachusetts Institute of Technology and Laureate Professor at the University of Arizona. Author of American Power and the New Mandarins and Manufacturing Consent (with Ed Herman), among many other books, he is a linguist, historian, philosopher, and cognitive scientist who has risen to prominence in the American consciousness as a political activist and the nation’s foremost public intellectual.

Robert Pollin is Professor of Economics and founding Co-Director of the Political Economy Research Institute (PERI) at the University of Massachusetts-Amherst. Among his many books are The Living Wage (with Stephanie Luce) and the edited volume Transforming the US Financial System (with Gary Dymski and Gerald Epstein). He has worked with the Joint Economic Committee of the US Congress and the United Nations Development Program.