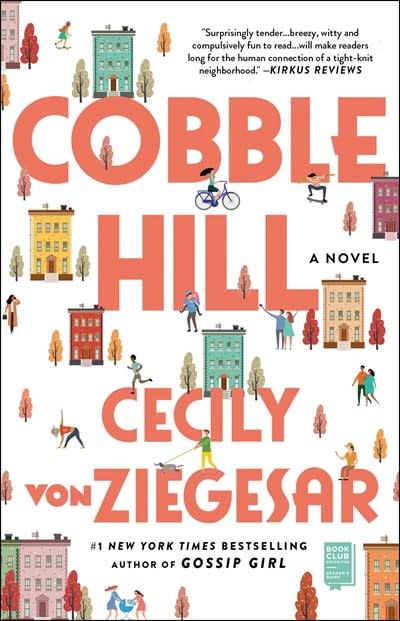 The #1 New York Times bestselling author of the Gossip Girl series brings her sharp-eyed and irresistible wit to this “quirky novel of lovable misfits” (Publishers Weekly) chronicling a year in the lives of four families in an upscale Brooklyn neighborhood as they seek purpose and community—until one unforgettable night at a raucous neighborhood party knocks them to their senses.

In this eclectic Brooklyn neighborhood, private storms brew amongst four married couples and their children. There’s ex-groupie Mandy, so underwhelmed by motherhood and her current physical state that she fakes a debilitating disease to get the attention of her skateboarding, ex-boyband member husband Stuart. There’s the unconventional new school nurse, Peaches, on whom Stuart has an unrequited crush, and her disappointing husband Greg, who wears noise-cancelling headphones—everywhere.

A few blocks away, Roy, a well-known, newly transplanted British novelist, has lost the thread of his next novel and his marriage to indefatigable Wendy. Around the corner, Tupper, the nervous, introverted industrial designer with a warehouse full of prosthetic limbs struggles to pin down his elusive artist wife Elizabeth. Throw in two hormonal teenagers, a ten-year-old pyromaniac, a drug dealer pretending to be a doctor, and a lot of hidden cameras, and you’ve got a combustible mix of egos, desires, and secrets bubbling in brownstone Brooklyn.

Cecily von Ziegesar is the #1 New York Times bestselling author of the Gossip Girl novels, upon which the hit television show is based. She lives in Brooklyn, New York, with her family.