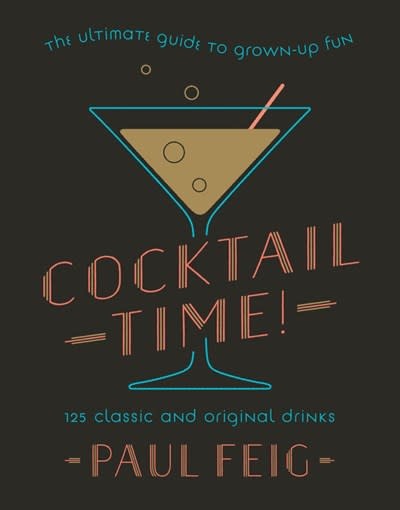 Elegant man-about-town and the director of Bridesmaids, Spy, and A Simple Favor Paul Feig serves up a beautifully designed cocktail and lifestyle guide with hilarious stories.

Famed TV and film writer, director, and producer Paul Feig is obsessed with cocktails and cocktail culture. It’s about having great conversations with friends. It’s about putting on your best clothes and throwing a smart gathering or heading to your favorite bar and having an interesting chat with the bartender. And it’s about staying home and mixing a drink in a beautiful glass to sip as you watch a great old movie by yourself.Paul has made an art and a science out of creating these elegant and festive environments and living his best life, whether at home in LA or New York or on location around the world, and it’s all here in Cocktail Time!—how to make the drinks, how to throw the parties, what music to play, and what glassware you need, along with more than 120 cocktail recipes, each served along with funny insider stories from Paul’s Hollywood life and famous friends.Cocktail Time! covers everything, from classics (and variations on them) like martinis, negronis, and hot toddies to original concoctions such as “The Feigtini” and holiday cocktails, as well as recipes from film and TV industry friends, such as the Charlize Theron Gibson, the (Angela) Kinsey Gin Fizz, Henry (Golding)’s Honey Plum G&T, and The Five (Michelle) Yeoh-Larm Fire.Cocktail Time! is a love letter to the aesthetics and culture around cocktails. It’s guaranteed to make you want to up your party-giving game—or at least your home bar situation. And it’s an immensely charming and readable window into one man’s friendly obsession.

Paul Feig is a writer, director, producer, and actor. He is known for creating the cult classic show Freaks & Geeks, directing Bridesmaids, The Heat, Spy, and the new Ghostbusters, and directing several Emmy-nominated episodes of The Office, including the cringe-tastic fan favorite “Dinner Party.” In 2020, he started a daily Instagram live series called Cocktail Time!, where he made cocktails every day for 100 days to raise money for first responders, essential workers, and Covid-19 charities. He has his own brand of gin, Artingstall’s Brilliant London Dry Gin, which has won a variety of awards, including Best of Show and Double Gold in the WSWA Spirits Tasting Competition. He is also the author of the memoirs Kick Me and Superstud and two middle-grade novels. He lives in L.A., New York City, and London with his wife, Laurie.