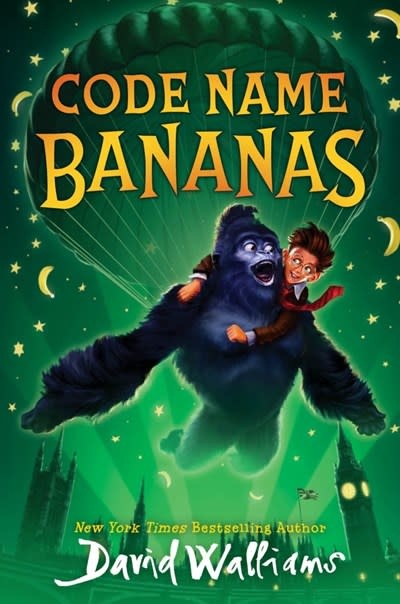 The UK's #1 bestselling children's author, David Walliams burst onto the US scene with the New York Times bestseller Demon Dentist. He’s back with an adventurous romp that mashes his trademark voice with a gripping historical thriller, featuring a striking new cover direction and all-new interiors with chapter-opener illustrations only, geared to appeal to the US market!

1940: BRITAIN IS AT WAR WITH NAZI GERMANY.Eleven-year-old Eric practically lives at the London Zoo. And there’s one animal in particular he loves to spend time with: Gertrude the gorilla.But with German bombs raining over London, Eric realizes Gertrude is in terrible danger, and together with his uncle Sid, a keeper at the zoo, the three go on the run. But while hiding out at the seaside, they uncover a top-secret Nazi plot.…

DAVID WALLIAMS is the New York Times bestselling author of Bad Dad, Demon Dentist, The Midnight Gang, Grandpa’s Great Escape, The Ice Monster, and Beast of Buckingham Palace. His novels have sold over forty million copies worldwide and have been translated into fifty-five languages. David’s books have achieved unprecedented critical acclaim—with many reviewers comparing him to his all-time hero, Roald Dahl. In addition to being a bestselling author, David is an actor, comedian, and television personality. In 2017, he was awarded an OBE for services to charity and the arts. He lives in the UK.