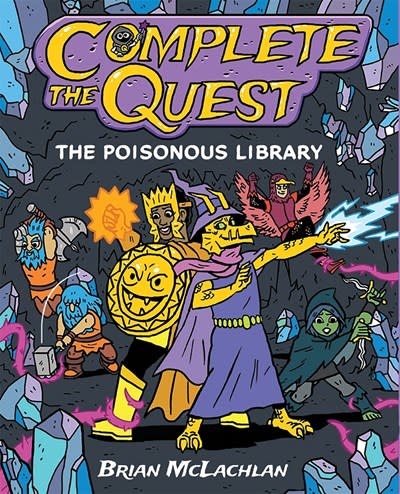 Complete the Quest: The Poisonous Library

An interactive graphic novel that’s also a story-based role-playing game in a book!

You start Complete the Quest by choosing your adventurers. Then you discover, in a graphic novel story, that Queen Evergreen has been poisoned. To save her, your team of heroes must travel across a series of perilous fantasy landscapes, from a witch’s desert tomb to a giant’s palace in the sky. You choose how they win the day, using the greatest heroic power of all: your imagination.

On your journey, you’ll meet new heroes, battle living graveyards and a dungeon that’s also a dragon, and discover that the poisoned book that attacked Queen Evergreen was just the first part of an evil plot that threatens the entire realm.

Award-winning creator Brian McLachlan has created a new kind of role-playing adventure for all ages, which reads like a graphic novel but also plays like a game.

Brian McLachlan is part writer, part artist, all cartoonist. He’s made comics for The New Yorker, The Nib, Nickelodeon, Owl, and Dragon Magazine. His book Draw Out the Story: Ten Secrets to Creating Your Own Comics won an ILA award for non-fiction. He lives in Toronto with his wife and two kids.