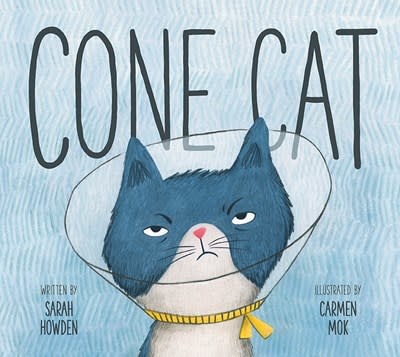 A crafty cat turns his cone of shame into a superpower

One day, Jeremy wakes up at the vet’s with a giant cone around his head. In a momentary existential crisis, he resigns himself to his new role as clumsy, smelly Cone Cat. That is, until the cone becomes instrumental in lapping up the last few bites of cereal on the breakfast table.

Surprisingly, Cone Cat can do a lot of things old Jeremy couldn’t. He can hunt spiders with ease, collect stuffing from the couch, and disguise himself as a bowl to steal a scoop of ice cream at a birthday party. When the cone is removed the next day, Jeremy starts to miss it. Will he ever get another chance to indulge in the tricks he pulled off as Cone Cat? It doesn’t take him too long to find out …

With lively illustrations and plenty of wit, this hilarious picture book about adapting to seemingly im-paw-ssible situations is sure to please kids and cat-lovers alike.

SARAH HOWDEN is an author and editor who lives with her husband and daughter in Toronto, Ontario. This is her first picture book.CARMEN MOK is an award-winning children's book illustrator. After studying studio art University of Waterloo and design at Sheridan College, she decided to dedicate herself to children's illustration. Carmen lives in St. Catharines, Ontario, Canada.