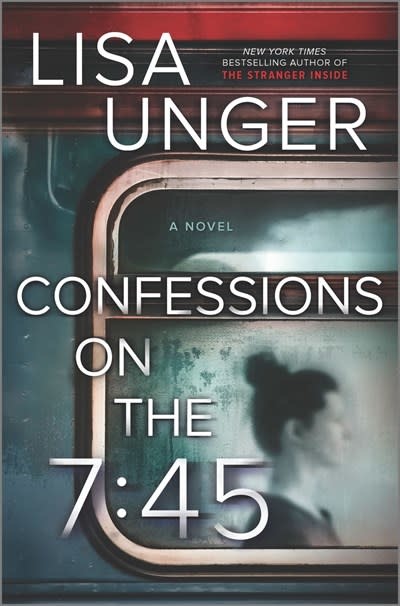 Reminiscent of the classic Strangers on a Train, by one of the most celebrated writers in crime fiction, Confessions on the 7:45 is a gripping and unforgetable thriller about two strangers who meet on a train, and the dark secrets that inextricably link them. Perfect for fans of Harlan Coben, Lisa Gardner, and Karin Slaughter.

Be careful to whom you tell your darkest secrets… Selena Murphy is commuting home from her job in the city when the train stalls on the tracks. She strikes up a conversation with a beautiful stranger in the next seat, who introduces herself as Martha. The woman confesses that she’s been stuck in an affair with her boss, and Selena, in turn, confesses that she suspects her husband is sleeping with the nanny. When the train arrives at Selena’s station, the two women part ways, presumably never to meet again. But days later, Selena’s nanny disappears. Soon Selena finds her once-perfect life upended. As she is pulled into the mystery of the missing nanny, and as the fractures in her marriage grow deeper, Selena begins to wonder, who was Martha really? But she is hardly prepared for what she’ll discover. Expertly plotted and reminiscent of the timeless classic Strangers on a Train, Confessions on the 7:45 is a gripping thriller about the delicate facades we create around our lives.

LISA UNGER is a New York Times and internationally bestselling author of eighteen novels. An award-winning and acclaimed writer with millions of readers worldwide, Lisa is widely regarded as a master of suspense. Her books are published in twenty-six languages and have been voted "Best of the Year" or top picks by the Today show, Good Morning America, Entertainment Weekly, Amazon, IndieBound and many others. In 2019, her novel Under My Skin and her short story "The Sleep Tight Motel" were both nominated for the prestigious Edgar Award. Her nonfiction work has appeared in the New York Times, Wall Street Journal, NPR and Travel + Leisure. Lisa lives on the west coast of Florida with her family.