Home » Constellation of the Deep 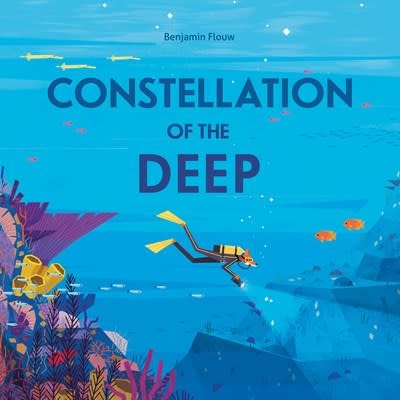 Constellation of the Deep

A stylish picture book about an underwater quest for an elusive, bioluminescent plant perfect for young conservationists and fans of Wes Anderson’s The Life Aquatic with Steve Zissou.

Fox loves nature, and enjoys discovering strange and fascinating plants. He especially loves the seaside, and often walks the salty coastal trails with his cousin Wolf. One day, Seagull tells the two about an especially interesting underwater plant called the constellation of the deep. According to Seagull, it grows on the bottom of the ocean, but no one knows exactly where, and it glows in the dark. Before long, Fox has donned his diving equipment, including a wet suit, a snorkel, a diving mask, fins and more, and sets off on an underwater quest to find this incredible plant. Along the way, Fox observes many different kinds of ocean life, like crabs, starfish, algae and an amazing array of corals. He also comes across some underwater friends who try to help guide him to the elusive plant. But Fox despairs when he loses his camera—even if he finds the constellation of the deep, how will he capture this amazing discovery?

With spreads of informational content interspersed throughout, Constellation of the Deep is a charming picture book featuring the same character from The Golden Glow that details the wonders of the underwater world and celebrates observing the beauty of nature.

BENJAMIN FLOUW graduated from a CG animation school in France and moved to London to create backgrounds for Cartoon Network’s show The Amazing World of Gumball. He is now based in Paris where he works as a freelance designer and illustrator for films and advertisements, with clients such as Variety, Martha Stewart Living and American Express. His influences run from mid-century illustrators like Miroslav Sasek and Mary Blair to 90’s low-poly video games. He is the author and illustrator of The Golden Glow.