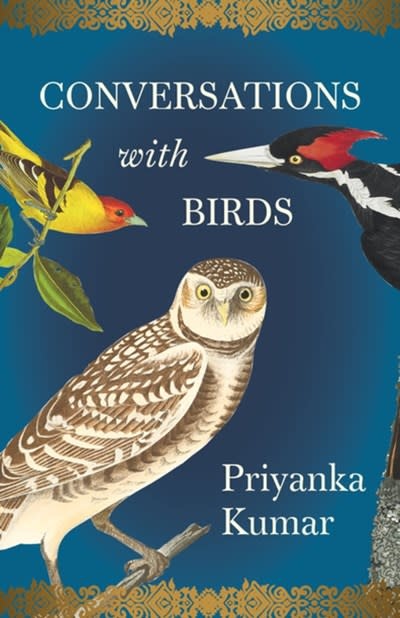 “Birds are my almanac. They tune me into the seasons, and into myself.” So begins this lively collection of essays by acclaimed filmmaker and novelist Priyanka Kumar. Growing up at the feet of the Himalayas in northern India, Kumar took for granted her immersion in a lush natural world. After moving to North America as a teenager, she found herself increasingly distanced from more than human life, and discouraged by the civilization she saw contributing to its destruction. It was only in her twenties, living in Los Angeles and working on films, that she began to rediscover her place in the landscape -- and in the cosmos -- by way of watching birds. Tracing her movements across the American West, this stirring collection of essays brings the avian world richly to life. Kumar’s perspective is not that of a list keeper, counting and cataloguing species. Rather, from the mango-colored western tanager that rescues her from a bout of altitude sickness in Sequoia National Park to ancient sandhill cranes in the Bosque del Apache National Wildlife Refuge, and from the snowy plovers building shallow nests with bits of shell and grass to the white-breasted nuthatch that regularly visits the apricot tree behind her family’s casita in Sante Fe, for Kumar, birds “become a portal to a more vivid, enchanted world.” At a time when climate change, habitat loss, and the reckless use of pesticides are causing widespread extinction of species, Kumar’s reflections on these messengers from our distant past and harbingers of our future offer luminous evidence of her suggestion that “seeds of transformation lie dormant in all of our hearts. Sometimes it just takes the right bird to awaken us.”

Priyanka Kumar is the author of Conversations with Birds. Her essays and criticism appear in The New York Times, The Washington Post, the Los Angeles Review of Books, The Huffington Post, and High Country News. She is a recipient of the Aldo & Estella Leopold Writing Residency, an Alfred P. Sloan Foundation Award, a New Mexico/New Visions Governor's Award, a Canada Council for the Arts Grant, an Ontario Arts Council Literary Award, and an Academy of Motion Pictures Arts and Sciences Fellowship. A graduate of the University of Southern California's School of Cinematic Arts and an alumna of the Bread Loaf Writers' Conference, Kumar wrote, directed and produced the feature documentary The Song of the Little Road, starring Martin Scorsese and Ravi Shankar. Kumar has taught at the University of California Santa Cruz and the University of Southern California, and serves on the Board of Directors at the Leopold Writing Program.