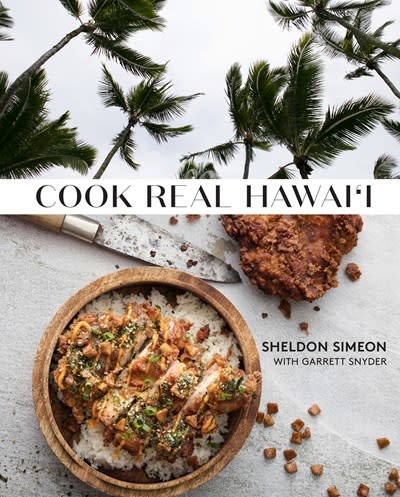 The story of Hawaiian cooking, by a two-time Top Chef finalist and Fan Favorite, through 100 recipes that embody the beautiful cross-cultural exchange of the islands.

On two seasons of Top Chef, Sheldon Simeon established himself as a leading young, creative chef (he was both a finalist and Fan Favorite on both seasons). The role he is even more proud to fill, though, is as the storyteller of Hawaiian cuisine and the many cultures that have come together there to create it: the native Hawaiian traditions, Japanese influences, Filipino cooking techniques, and dynamic flavors that are closest to Sheldon’s heart.

In a place where over 90% of food is imported, the story of Hawaiian cuisine has always been told on the mainland through the lens of tourism. Sheldon’s story of Hawai’i focuses on the lives and cooking routines of the locals and the efforts to bring back traditional agriculture and foods. Sheldon’s recipes are uncomplicated but full of flavor; he speaks with reverence but cooks with curiosity, and inspires readers to do the same.

Sheldon Simeon is the chef and owner of Lineage, a restaurant that explores the ancestral roots of Hawaiian cuisine, as well as Tin Roof, where he serves contemporary Hawaiian dishes in a casual setting, both in Maui. In 2019, Lineage was named one of Bon Appétit’s Top 50 Nominees for America’s Best New Restaurants. Sheldon was a finalist on Season 10 of Top Chef: Seattle, becoming a finalist en route, and later competed on Season 14 of Top Chef: Charleston. He was voted Fan Favorite on both seasons.