Home » Cooking alla Giudia: A Celebration of the Jewish Food of Italy 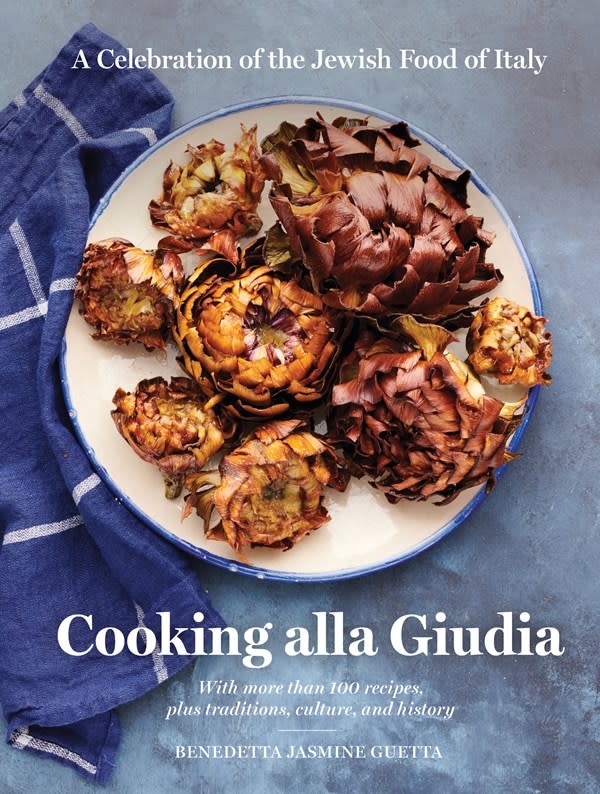 Cooking alla Giudia: A Celebration of the Jewish Food of Italy

Jews have lived in Italy for thousands of years, yet their contributions to Italian cuisine have been largely untold. Cooking alla Giudia shares the recipes, but also the connections of the Jewish people to many beloved Italian dishes and other wonderful delicacies.

Cooking alla Giudia is the ultimate tribute to the wonderfully rich, yet still largely unknown, culinary heritage of the Jews of Italy. From Roman deep-fried artichokes (carciofi alla giudia) to Venetian sarde in saor (sweet-and-sour sardines), Apulian orecchiette pasta, and Sicilian caponata, some of Italy’s best-known dishes are Jewish in origin. But little is known about the Jewish people in Italy and their culinary traditions. It was the Jews, for example, who taught Italians to eat the eggplant, and thus helped inspire the classic eggplant parmigiana and many other local specialties. With a collection of kosher recipes from all regions of Italy, including plenty of vegan, vegetarian, and gluten-free options, author Benedetta Jasmine Guetta is on a mission to tell the story of how the Jews changed Italian food, to preserve these recipes, and to share with home cooks the extraordinary dishes prepared in the Jewish communities of Italy. Highlighted throughout the book are menus with regional Italian specialties, along with short, useful guides to the Italian cities with Jewish history. The book will show how to integrate the recipes into your everyday meals and holiday traditions as well.

Benedetta Jasmine Guetta is an Italian food writer and photographer. She was born in Milan, but she lives in Santa Monica, California. In 2009, she cofounded a website called Labna, the only Jewish/Kosher cooking blog in Italy, specializing in Italian and Jewish cuisine. Since then, she has been spreading the word about the marvels of Italian Jewish food in Italy and abroad, teaching the recipes of the cuisine to a growing number of people in cooking schools, synagogues, and community centers, among other institutions. Her work has been featured in numerous news outlets in Italy and abroad, including the Washington Post, Cosmopolitan, Elle à Table, Saveur, and Tablet. Guetta has previously coauthored two cookbooks in Italian; this is her first English-language cookbook.