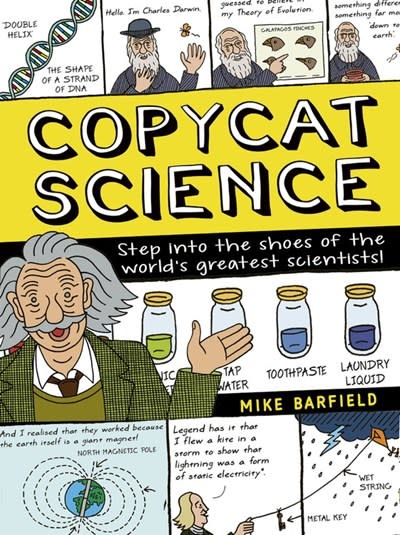 Explore famous scientific discoveries through humorous comic strips – then have a go at copying the science experiments for yourself!

Explore the wacky world of STEM in this comic book of exciting experiments. Defy gravity with air pressure!Extract DNA from a living thing!Learn the science of SLIME!Create a lightning bolt in the dark!Prove theories about light with Newton's wheel!...and much more! Discover STEM topics through the lives of over 40 scientists and their amazing discoveries. Read the comic strips then have a go at each STEM experiment yourself. Featuring a diverse range of scientists throughout history this book will inspire you to give science a go! Are you ready?

Mike Barfield is a writer, poet, performer, songwriter, ukulele player, and cartoonist. He has written extensively for TV and radio - with credits as diverse as Spitting Image, The Dennis the Menace and Gnasher Show and five years on Who Wants To Be A Millionaire. His cartoon feature Apparently has appeared in the pages of Private Eye for over 20 years, and his drawings have been on display in the Cartoon Museum, the V & A, the Museum of London, and Nigella Lawson's downstairs loo.

His Destroy This Book series (published by Buster Books) has been sold around the world, starting with the Destroy This Book In The Name of Science! The Element in the Room (Lawrence King, 2018) which was shortlisted for the Blue Peter Book Awards 2019.