Home » Coquí in the City 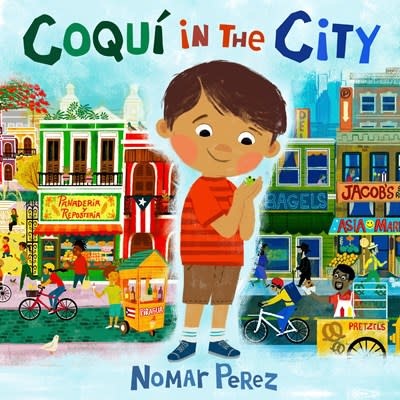 Coquí in the City

$18.99
Ages 3 to 7, Grades P to 2
A heartfelt picture book based on the author-illustrator's own experiences, about a boy who moves to the U.S. mainland from Puerto Rico and realizes that New York City might have more in common with San Juan than he initially thought.

Miguel's pet frog, Coquí, is always with him: as he greets his neighbors in San Juan, buys quesitos from the panadería, and listens to his abuelo's story about meeting baseball legend Roberto Clemente. Then Miguel learns that he and his parents are moving to the U.S. mainland, which means leaving his beloved grandparents, home in Puerto Rico, and even Coquí behind. Life in New York City is overwhelming, with unfamiliar buildings, foods, and people. But when he and Mamá go exploring, they find a few familiar sights that remind them of home, and Miguel realizes there might be a way to keep a little bit of Puerto Rico with him--including the love he has for Coquí--wherever he goes.