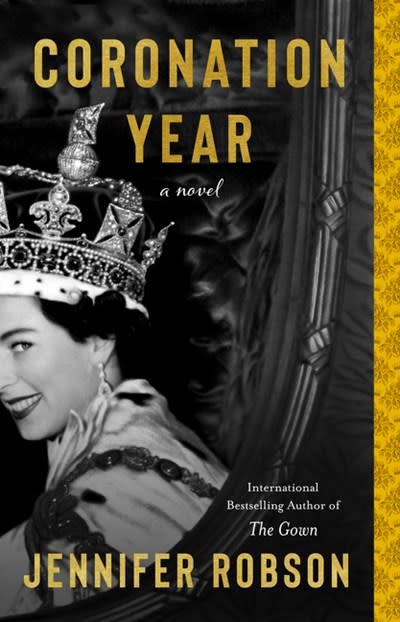 A Paperback Original—Also Available in a Hardcover Library EditionThe USA Today bestselling author of The Gown returns with another enthralling and royal-adjacent historical novel—as the lives of three very different residents of London’s historic Blue Lion hotel converge in a potentially explosive climax on the day of Queen Elizabeth’s Coronation.

It is Coronation Year, 1953, and a new queen is about to be crowned. The people of London are in a mood to celebrate, none more so than the residents of the Blue Lion hotel.Edie Howard, owner and operator of the floundering Blue Lion, has found the miracle she needs: on Coronation Day, Queen Elizabeth in her gold coach will pass by the hotel’s front door, allowing Edie to charge a fortune for rooms and, barring disaster, save her beloved home from financial ruin. Edie’s luck might just be turning, all thanks to a young queen about her own age. Stella Donati, a young Italian photographer and Holocaust survivor, has come to live at the Blue Lion while she takes up a coveted position at Picture Weekly magazine. London in celebration mode feels like a different world to her. As she learns the ins and outs of her new profession, Stella discovers a purpose and direction that honor her past and bring hope for her future.James Geddes, a war hero and gifted artist, has struggled to make his mark in a world that disdains his Indian ancestry. At the Blue Lion, though, he is made to feel welcome and worthy. Yet even as his friendship with Edie deepens, he begins to suspect that something is badly amiss at his new home.When anonymous threats focused on Coronation Day, the Blue Lion, and even the queen herself disrupt their mood of happy optimism, Edie and her friends must race to uncover the truth, save their home, and expose those who seek to erase the joy and promise of Coronation Year.

Jennifer Robson is the internationally bestselling author of Our Darkest Night, The Gown: A Novel of the Royal Wedding, Goodnight from London, Moonlight Over Paris, After the War Is Over, and Somewhere in France. She holds a doctorate in British economic and social history from Saint Antony’s College, University of Oxford, where she was a Commonwealth Scholar and an SSHRC Doctoral Fellow. She lives in Toronto, Canada, with her husband and children.