Home » Corruptible: Who Gets Power & How It Changes Us 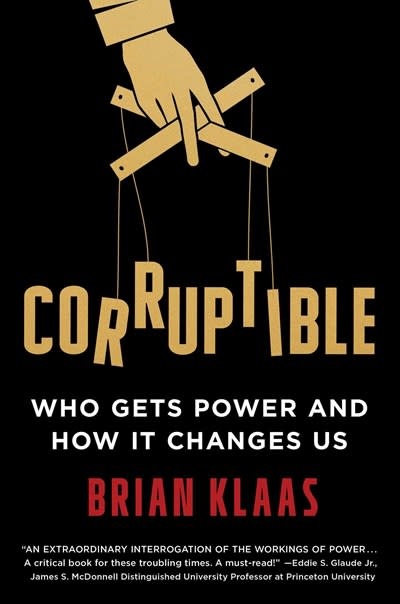 Corruptible: Who Gets Power & How It Changes Us

A provocative and revelatory look at what power is, who gets it, and what happens when they do, based on over 500 interviews with those who (for a while, at least) have had the upper hand—from the creator of the Power Corrupts podcast and Washington Post columnist Brian Klaas.

Does power corrupt, or are corrupt people drawn to power? Are entrepreneurs who embezzle and cops who kill the result of poorly designed systems or are they just bad people? Are tyrants made or born? If you were suddenly thrust into a position of power, would you be able to resist the temptation to line your pockets or seek revenge against your enemies?

To answer these questions, Corruptible draws on over 500 interviews with some of the world’s top leaders—from the noblest to the dirtiest—including presidents and philanthropists as well as rebels, cultists, and dictators. Some of the fascinating insights include: how facial appearance determines who we pick as leaders, why narcissists make more money, why some people don’t want power at all and others are drawn to it out of a psychopathic impulse, and why being the “beta male” (second in command) may actually be the optimal place for health and well-being.

Corruptible also features a wealth of counterintuitive examples from history and social science: you’ll meet the worst bioterrorist in American history, hit the slopes with a ski instructor who once ruled Iraq, and learn why the inability of chimpanzees to play baseball is central to the development of human hierarchies.

Based on deep, unprecedented research from around the world, Corruptible will challenge your most basic assumptions about becoming a leader and what might happen to your head when you get there. It also provides a roadmap to avoiding classic temptations, suggesting a series of reforms that would facilitate better people finding a path to power—and ensuring that power purifies rather than corrupts.

Brian Klaas is an associate professor in global politics at University College London and a weekly columnist for The Washington Post. Klaas has conducted field research across the globe, interviewing people who wield power—despots, CEOs, coup plotters, rebel leaders, torture victims, crooked advisers, dissidents, cult leaders, criminals, and generals. He has advised major politicians and organizations including NATO, the European Union, American political leaders, and Amnesty International. His prior books include The Despot’s Accomplice, The Despot’s Apprentice, and How to Rig an Election (coauthored with Professor Nic Cheeseman). Klaas is also the host of the Power Corrupts podcast, which won the Bronze award for “Smartest Podcast of 2020” in the British Podcast Awards. Klaas, an American, lives in London. You can find him at BrianPKlaas.com and on Twitter (@brianklaas).