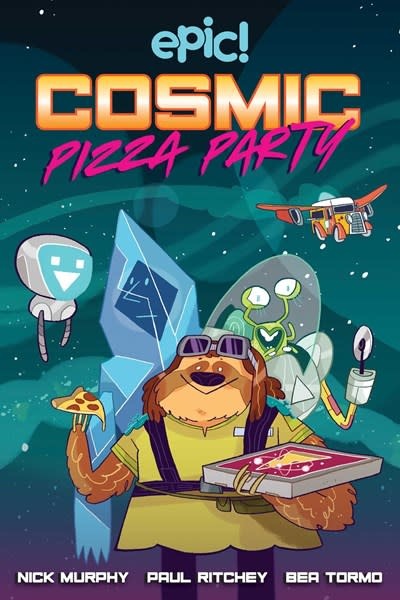 No danger is too great, no cheese too gooey for the Cosmic Pizza crew! Delivering fast, cheap, and (maybe) tasty pizza to a planet near you! From Epic Originals, Cosmic Pizza Party is a hilarious, three-book graphic novel series about friendship, pizza, and outer space!

When the biggest pizza tycoon in the universe tells them the secret location of a cheese that’s literally to die for, the crew jumps at the chance to take their pizza to the next level. But as they venture among the curds, they find more adventure than they bargained for. Space slugs, sandstorms, and culinary critics are just some of the dangers that the crew will have to overcome together if they want to throw the most amazing, most intergalactically awesome pizza party!

Nick Murphy is a filmmaker who cohosts the tabletop role-playing podcast Pretend Friends. He also produces and cohosts a gaming series on YouTube. He’s a graduate of the film/digital video program at The University of the Arts. To Save Christmas, a short film he codirected with his writing and producing partner, Paul Ritchey, won the award for best short at the 2016 First Glance Film Festival. Nick enjoys the 80s, time travel, Star Wars, and being colorblind. He lives in Philadelphia with his wife, artist Rebecca Chewning, and their awesome son, Desmond.

Paul Ritchey is a filmmaker and web host living in Philadelphia. He hosts a weekly gaming comedy show. He also performs on Pretend Friends, an actual-play tabletop role-playing radio show. Paul is incredibly fast. Some question his quickness, but that is only because his speed is so beyond human perception that he appears to be standing still.

Bea Tormo is a children’s book illustrator by day and a comic artist by night. She lives near Barcelona, Spain, where she enjoys being part of a community of artists. Besides illustrating children’s books, Bea works on comic books, magazines, webcomics, and fanzines. She especially loves drawing grumpy people and monsters.