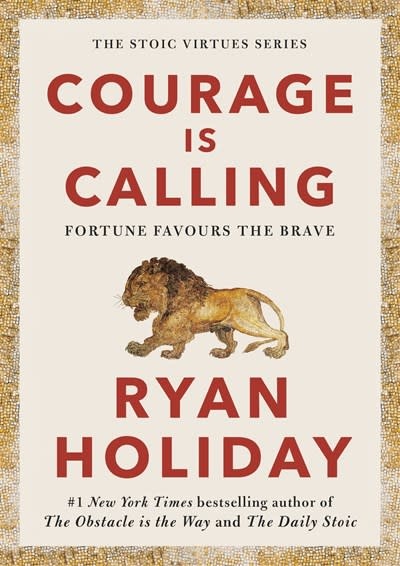 Ryan Holiday’s bestselling trilogy—The Obstacle Is the Way, Ego is the Enemy, and Stillness is the Key—captivated professional athletes, CEOs, politicians, and entrepreneurs and helped bring Stoicism to millions of readers. Now, in the first book of an exciting new series on the cardinal virtues of ancient philosophy, Holiday explores the most foundational virtue of all: Courage.

Almost every religion, spiritual practice, philosophy and person grapples with fear. The most repeated phrase in the Bible is “Be not afraid.” The ancient Greeks spoke of phobos, panic and terror. It is natural to feel fear, the Stoics believed, but it cannot rule you. Courage, then, is the ability to rise above fear, to do what’s right, to do what’s needed, to do what is true. And so it rests at the heart of the works of Marcus Aurelius, Aristotle, and CS Lewis, alongside temperance, justice, and wisdom.

You’ll also delve deep into the moral dilemmas and courageous acts of lesser-known, but equally as important, figures from ancient and modern history, such as Helvidius Priscus, a Roman Senator who stood his ground against emperor Vespasian, even in the face of death; Frank Serpico, a former New York City Police Department Detective who exposed police corruption; and Frederick Douglass and a slave named Nelly, whose fierce resistance against her captors inspired his own crusade to end slavery.

We need you to step into the arena and fight.

Ryan Holiday is one of the world’s foremost writers on ancient philosophy and its place in everyday life. His books like The Obstacle Is the Way, Ego Is the Enemy, The Daily Stoic, and the #1 New York Times bestseller Stillness Is the Key have sold millions of copies and been translated into over 30 languages. He lives outside Austin, Texas, with his wife and two boys…and cows and donkeys and goats.